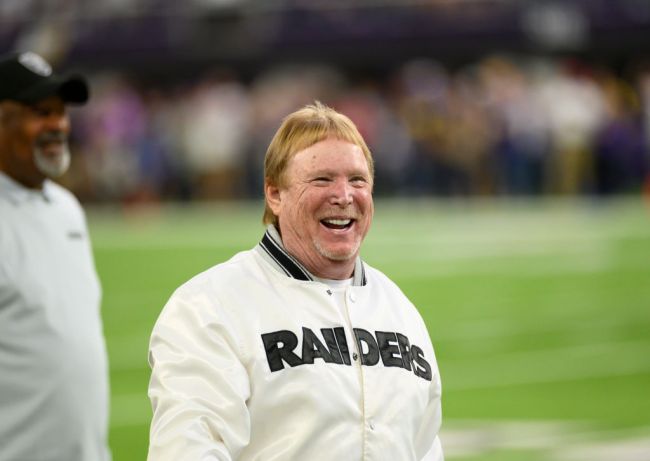 Raiders’ owner Mark Davis was involved in what appears to be a routine fender bender on Wednesday. The wreck itself isn’t the story here, however, there’s actually a ton to unpack here besides the accident itself.

The most surprising thing about the story is that Davis wasn’t driving some ridiculously expensive car. The man is worth over $500 million, so you’d expect to see him whipping around a very nice vehicle, especially around the streets of Las Vegas, but instead, he was behind the wheel of a Mini-Cooper.

Then, you have the outfit he was wearing at the time of the accident. Davis has always had a unique fashion sense, so his ‘fit isn’t at all surprising, but it’s still worth talking about.

Before running out to the store in his sick blacked out Mini, Davis threw on a long-sleeve t-shirt that’s been in his life for no less than two decades, tucked that into some faded jeans that were undoubtedly part of a 2-for-1 deal at American Eagle, and slid on some white Nikes. What really brings the outfit together is the white belt.

Mark Davis really needs a new haircut, and to stop getting in parking lot crashes. pic.twitter.com/MyCEuZqgYJ

All jokes aside, you can’t not love what you see from Davis in this moment. He may be the only person worth over $1 million – let alone $500 million – that drives a Mini-Cooper. This shows he’s fiscally responsible and that he understands that every car ever made turns into a money pit as soon as you purchase it.

Imagine getting into a wreck with a guy worth $500 million and you’re the one driving the nicer car in the situation.