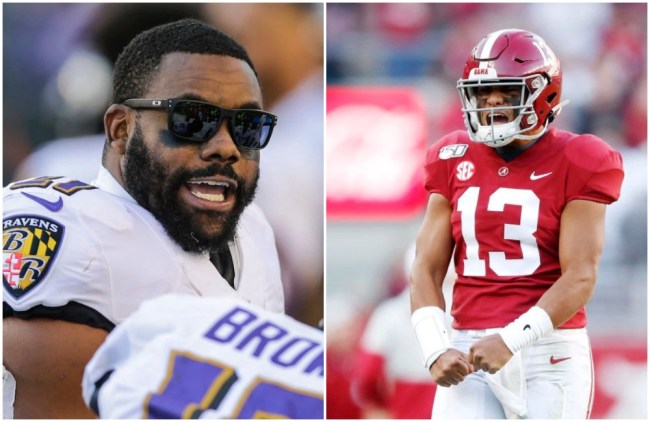 It’s no secret that Tua Tagovailoa is an extremely talented quarterback. Anybody that’s ever seen him throw a football knows he’s one hell of an athlete, but there are also obvious question marks surrounding his name as the NFL Draft fast-approaches.

With Joe Burrow set to go first-overall to Cincinnati, most of the attention has turned to Tagovailoa not only for the simple wonderment of which team is going to pick him but because of his injury history.

After suffering a right hip dislocation and posterior wall fracture late last season resulting in a few missed games and the inability to participate at the NFL Combine, plenty of NFL Draft experts are concerned about whether or not he’s durable enough to play in the NFL and if he’s worth taking a risk on early in the Draft.

Mark Ingram, a former Alabama standout like Tagovailoa, was asked if he shares any of those concerns about the quarterback’s health status on ESPN’s First Take on Thursday morning.

“Obviously injuries and availability is a huge part of being a pro and being in the NFL. I can understand durability concerns, but I think every player has durability concerns, man,” Ingram said according to 247 Sports. “I just think the type of person he is, his accuracy, his accolades — the number of yards he threw for, the efficiency, even some mobility in the pocket, out of the pocket, I just think he has great potential, you know what I mean, to be a star in this league. And I think he will be a star in this league.”

While it should come as no surprise that Ingram is fully on board with his fellow Crimson Tide great, his statement about ‘every player having durability concerns’ is an interesting, and accurate way to spin it. Plenty of injury-prone players have entered the league and gone on to have long, successful careers while other guys that maybe never missed a snap in college got to the NFL and were immediately bitten by the injury bug.

Ingram is confident that Tagovailoa will be a star at the next level.