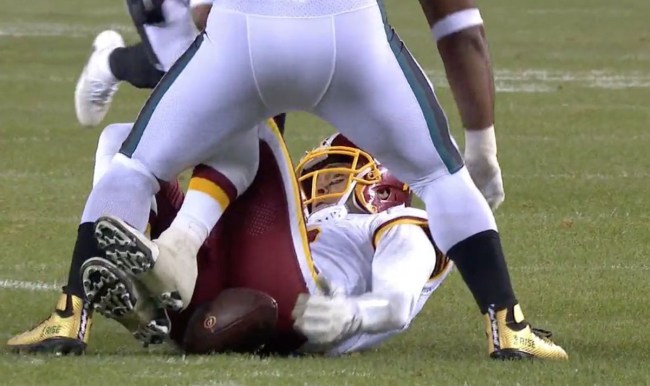 Over the course of my time on the planet, I’ve witnessed a few historical events that have left a permanent impact on the world— monumental moments that I’ll be able to describe with vivid detail until my brain gets tired of retaining long-term memories.

One of these events transpired on November 22, 2012, a date that has been permanently seared into my brain.

It was a Thanksgiving seemingly like any other. I’d just woken up from a turkey-induced nap to catch the last of that day’s football games, an evening matchup between the Patriots and the Jets.

The contest got off to a slow start but the Patriots put up a couple of touchdowns in quick succession to take a 14-0 lead with around 10 minutes left in the fourth quarter.

After the second score, Mark Sanchez took the field in an attempt to stop the bleeding.

As you probably know, he did the exact opposite.

There aren’t many things in life that make me actually laugh out loud but I remember sitting on my couch and crying with laughter as NBC broadcasted the Butt Fumble on loop, my abs getting sorer with each replay.

I didn’t think things could get any funnier but the Jets proved me wrong on the ensuing kickoff return, where they coughed up the ball and allowed Julian Edelman to score the Patriots’ third touchdown in 52 seconds— a development that left me howling and gasping for air.

It’s hard to believe it’s been over six years since the Butt Fumble and even harder to believe Mark Sanchez is still signed to an NFL roster but he was on the sidelines last night when the Redskins took on the Eagles in a Monday Night Football matchup nobody asked for.

The Redskins were forced to turn to Colt McCoy after Alex Smith’s season ended following a horrific injury. Unfortunately, their new starter broke his leg in the first quarter, which meant it was time for Sanchize to shine.

It didn’t take long for the QB to fumble the ball, but unlike that fateful day in 2012, a butt was used for good instead of evil when Sanchez managed to fall ass-first on top of the loose pigskin and restore balance to the universe.

No one handles the deft interaction between a butt and a football like Mark Sanchez. No one. https://t.co/9eVgwGii6n

Sanchez is so consistent. From the butt fumble to the butt recovery. You can count on a guy like that!

Colin Kaepernick puts a knee to the ground and is banished from the league. Mark Sanchez puts a football to a butt and gets an NFL paycheck and playing time on Monday Night Football. Can we get our priorities straight here?

The Redskins will now have to find another QB to back up Sanchez, and based on Dan Snyder’s long history of tolerance and acceptance, I’m sure he’ll be the first person they call.