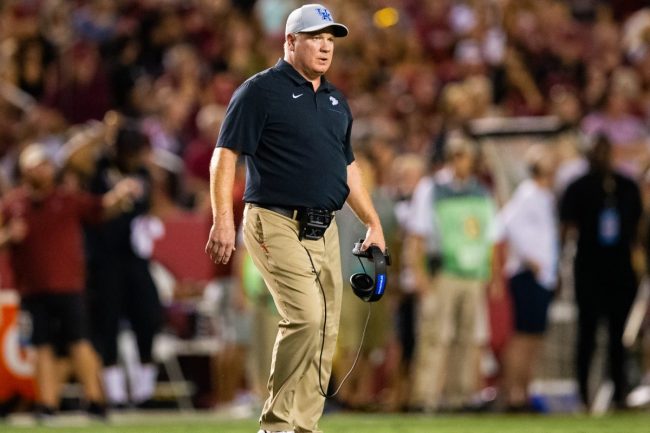 SEC Network is releasing some footage from its “Talkin’ Season” special where head coaches are interviewed to give their thoughts on the upcoming campaign.

Kentucky leader Mark Stoops is under fire for a seeming shot at South Carolina head coach Shane Beamer regarding a viral video that was posted at SEC Media Days.

In that clip, the Gamecocks’ head coach is seen hopping on a TikTok trend, posting a video of him rapping Soulja Boy’s “Turn My Swag On,” in a pair of sunglasses while the team danced in the background.

Beamer is one of the more active coaches on Twitter, often interacting with fans and media accounts while also being made available for public appearances. For those reasons, he’s been referred to as genuine while promoting a fun and charismatic culture in Columbia for a program that was in desperate need of a change following the Will Muschamp era.

But Stoops apparently thinks it’s more of a climate change vs. culture change happening at South Carolina. For some reason, he felt it necessary to bring up what’s happening with the Gamecocks when talking about his own team at Kentucky.

In the “Talkin’ Season” clip, Stoops talks about climate vs. culture, noting that he’s been able to change the perception of Kentucky football over the last few seasons. His Wildcats have won 10 games in two of the last four seasons, and they’re being talked about as a dark horse candidate in the SEC East.

But it was odd for him to throw shade at a coach that’s been in the SEC just one season, seemingly unprovoked. Take a listen to his comments when asked what he’s been able to change about his program’s perception in the league.

“I think it’s the respect throughout the league… I’ve talked years ago about climate vs. culture. It’s easy to change a climate. You just change your uniforms, talk some game, dance around, put on some stupid sunglasses… But to change a culture is at the core.”

It seems Beamer was on the mind of Coach Stoops during this session, which was taped right after the release of that viral video. Maybe he believes the Gamecocks are getting more attention than his Wildcats this preseason despite Kentucky having won seven of the last eight over South Carolina.

Many were quick to react to the shot on social media.

Mark Stoops asked about building culture and said it’s about more than “Dance around, put on some stupid sunglasses.”

This was taped in Atlanta on July 20th, a day after a video with a coach in sunglasses was released https://t.co/n0qsVcQFpx pic.twitter.com/bmgJqxzFAv

“Dance around, put on some stupid sunglasses.”

Those sunglasses were not stupid. https://t.co/7Es3PeyTlq

The Gamecocks and Wildcats battle it out on October 8th in Lexington. We’ll see if Beamer uses this as bulletin board material when facing Stoops this season.