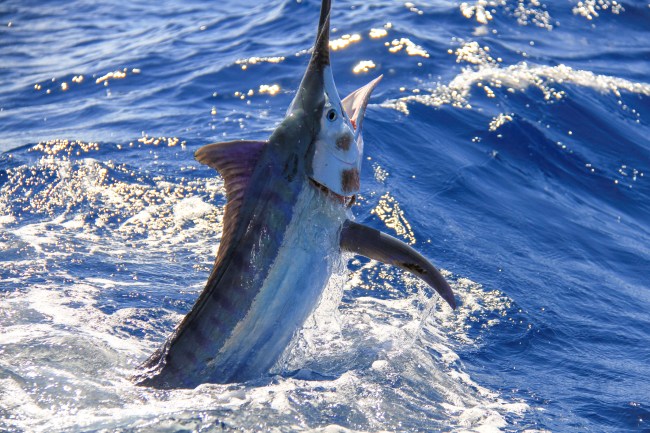 Marlin fishing isn’t for everyone. It typically involves long days of slow trolling, dragging lures and bait behind the boat in a wide ‘spread’ while trying to get a marlin to rise from the depths and bite one of the hooks. Sometimes you’ll reel in all of the teasers when a billfish rises and then throw back a super enticing bait for the fish to strike and that’s when all hell breaks loose.

This means you’re spending hours of just putting along at slow speeds and then you go ZERO TO ONE HUNDRED REAL QUICK as Drake might say. When I caught my first Blue Marlin in Costa Rica it was a sailfish that rose behind the boat first about to take one of the baits when a blue marlin crashed in out of nowhere, knocked the sailfish out of the way, grabbed the lure and started screaming drag.

It all happened so fast I didn’t know my ass from my elbow at that moment I just knew I needed to get the fighting belt on and start fighting the fish. I have to imagine that’s what these two brothers in Australia‘s New South Wales felt like when they hooked up to this marlin estimated between 80 to 100 kilograms (175 to 220 pounds). Then things got REALLY REALLY BAD when the fish jumped in the boat, stabbed one brother in the shoulder, slashed the other, and then hopped out and back into the water.

Here’s the story from the Sydney Morning Herald:

Nine News reported one of the brothers told police that hitting the marlin felt like hitting a cow.
As the marlin thrashed about, its bill sliced the lower right arm of one of the brothers, aged 46, and cut the right shoulder of the other brother, 48.
The third man, also 46, was unharmed and the marlin managed to flip out of the boat and back into the water.
The brothers were taken to Coffs Harbour Base Hospital with non-life threatening injuries.
The younger brother was then flown to Sydney’s Royal North Shore Hospital where he remains in a stable condition.
The older brother was discharged on Thursday night, a hospital spokeswoman said.

Sounds pretty gnarly, right? The bill of a marlin can carry some pretty nasty bacteria and fishermen who handle these fish ALWAYS wear gloves. One of the men received lacerations and fractures according to For The Win:

“The gentleman who was closest to the fish saw it at the very last moment and put his arm up to protect himself, and mainly his head, and that’s when the fish has impacted and caused most of the damage,” Westpac Rescue Helicopter crewman Michael Kerry told ABC. “He has a very deep laceration to that arm as well as fractures.”

Stan Young of Wooli Fishing Charters told ABC it was a fluke accident, adding, “They’re lucky they’re alive, especially the guy that got speared in the shoulder and come out the other side of him—terrible. It’s like being stuck with a sword.” (via)

This isn’t exactly unheard of in marlin fishing. One aspect of this type of fishing is you often ‘chase’ the fish once it’s hooked meaning the captain of the boat kicks the engines into reverse and always has the angler fighting the fish pointed directly at the fish while reversing towards the fish.

This can become tricky if the marlin weighing several hundred pounds ever decides to change directions and swim directly at the boat. These fish also jump like hell. They’re some of the most highly-skilled acrobats on the planet when they’re hooked up to a fisherman. In an instant, they can change course and start jumping at the boat and it can end up like this:

Or like this marlin fishing incident that I wrote about a few years back here on BroBible: