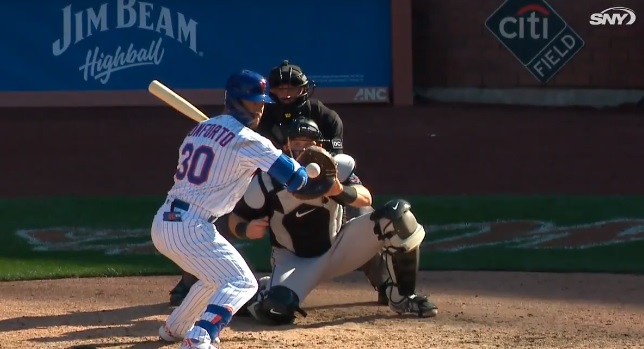 The Miami Marlins got absolutely screwed by the home plate umpire during their game against the Mets.

In the bottom of the ninth inning with two outs and the bases loaded, Marlins relief pitcher Anthony Bass believed the game was going to extra innings after the umpire called a strikeout on batter Michael Conforto.

Unfortunately for Bass, the umpire immediately reversed his decision and called a hit-by-pitch after the ball grazed Conforto’s arm.

MICHAEL CONFORTO GETS HIT BY A PITCH AND THE METS WIN IT 3-2!!!!! pic.twitter.com/R1QdgiRQJ5

During the replay, it was clear that Conforto blatantly leaned into the pitch which is illegal.

This is how the Mets game ended. Michael Conforto very clearly leaned into this pitch to get the walk-off HBP.

The umpiring crew couldn’t overturn the call after the HP umpire called it a HBP. pic.twitter.com/XwdpNacjyM

Unfortunately, the hit-by-pitch call wasn’t reversed on replay because umps can’t review the lean-in by Conforto.

Conforto didn’t seem to mind the call that went in his favor.

Michael Conforto discusses the final play of the game:

Fans however were furious.

I just watched Michael Conforto stick his elbow guard out so he'd get hit by a would-be strike, with bases loaded in 9th vs. Marlins. He purposefully got hit by a pitch over plate, ump missed it, and still did nothing after review. Game-winning RBI and a walk-off HBP. Ridiculous.

Michael Conforto: “I was trying to get out of the way” pic.twitter.com/XYPY9dJ640

Umpire should have stuck with the original call of strike 3. If a pitch is in the strike zone and hits the batter, it is still a strike. The point of having replays is to get the calls right. This wasn’t right, and it wasn’t just.