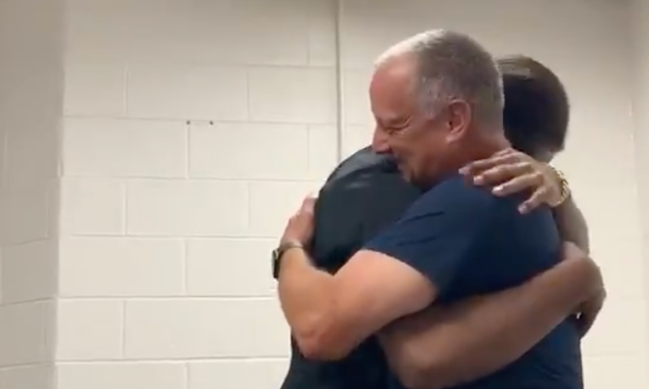 There is just over a week to go until September call-ups in Major League Baseball, but the Miami Marlins couldn’t wait and it made for an incredible moment. On Sunday, the team decided to move its No. 2 prospect Edward Cabrera to the Major League level.

As you will see, he did not see it coming. The 23-year-old from the Dominican Republic was called into the organization’s AAA manager Al Pedrique’s office.

Pedrique tried to play it cool and asked Cabrera what he was doing on Monday, which was a scheduled day off for the team. Cabrera said that he was going to rest.

Those plans quickly changed when Pedrique told his pitcher that he could not take the day off due to travel. And then things started to click—

Cabrera was headed to the big leagues and a lifelong dream was coming true. His reaction to the news is what makes sports great.

Cabrera clearly had no idea that the promotion was coming and might have been surprised by the news. He had just allowed two monstrous moonshots in just four innings of work, which was not his best outing.

Nevertheless, the 6-foot-5, 217-pound prospect got the news that he had worked his whole life to hear and couldn’t help but get emotional. Can you blame him?

Cabrera is set to make his MLB debut against the Nationals on Wednesday and will hope to continue his impressive strikeout rate. He is currently sitting down about 15 batters per nine innings.