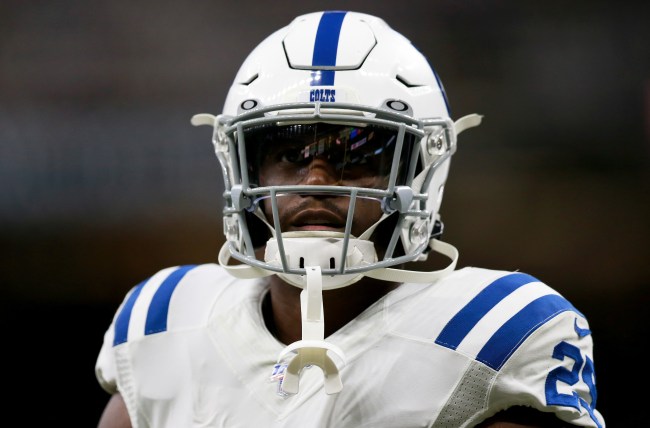 Colts running back Marlon Mack may have just found the latest way for fans to take in the NFL experience. That’s because, during a recent team practice, the fourth-year player donned a bodycam for the whole thing, giving unique angles and slo-mo looks at what it’s like down on the gridiron with 250-pound linebackers breathing down your neck.

As you might imagine, the footage is fucking incredible, with the Colts’ Twitter account sharing the video of Marlon Mack’s bodycam footage, touting it as experiencing practice as an NFL running back (*without all that contact and physical activity). Take a look below at the awesomeness that was created.

Experience practice as an NFL RB*!

Guys, this is fucking awesome, and something that Marlon Mack and the rest of his Colts teammates should immediately pitch to the NFL for regular season games. Seriously, if the league wants to step up its efforts to engage fans and give them part of the game experience, enough of the bullshit (and edited) mic’d up stuff we usually get — which is never that fun anyway; just ask Russell Wilson. A bodycam that shows the intricacies of being a player out there who needs to keep his head on a swivel would be fucking genius, and something that’d be revolutionary in sports.

Given the result of the Mack bodycam footage, people on Twitter agreed that this needs to be a real thing in real games, not just regulated to a practice here and there. Take a look at what some social media users were saying.

@Colts Give the production man (or woman) a raise. Great quality and fun content.

how does this only have 940 likes almost a day later? this was great.

This how ESPN NFL 2K5 use to look pic.twitter.com/6phbuBosgb

I know the NFL often stands for “No Fun League,” so this whole bodycam thing probably isn’t going be adopted anytime soon. But, shit, in an NFL season that’ll be unlike any other — given the fact that most fans probably won’t be at stadiums — why not at least test this out to see if ratings stay up as the game is really brought into a fan’s living room. Shit, this is almost too perfect.