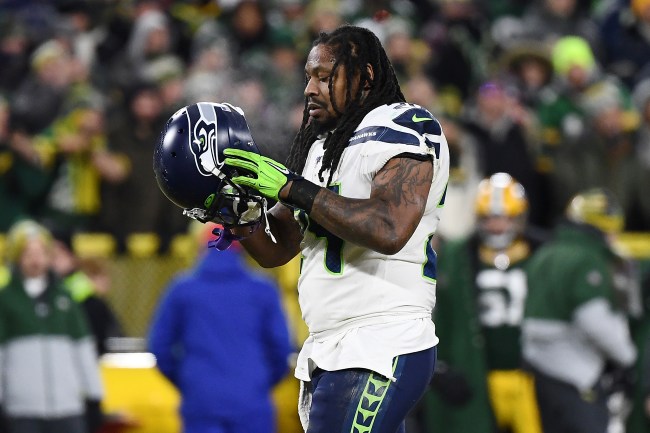 The NFL is a more enjoyable league when Marshawn Lynch is suiting up for the Seattle Seahawks. I’m no ‘hawks fans but they’re still a top-tier team and due to the West Coast timeslots I always end up watching a disproportionate amount of Seattle games every season and Marshawn’s a character that makes the game more exciting. I’m moderately certain this is something we can all agree on because to this day I’ve never met a Marshawn Lynch hater.

What’s next? According to a report last night from ESPN’s Brady Henderson, Marshawn’s agent is in discussions to see him return to the Seattle Seahawks for the 2020-2021 NFL season, assuming everything moves forward as expected.

Free-agent running back Marshawn Lynch said his agent has been in discussions with the Seahawks about a potential return to Seattle.

“Well, it’s almost on that ‘expect the unexpected,'” Lynch told Scott Van Pelt on Monday when asked about his future. “But just as far as right now, what I do know is, Imma keep it solid. My agent [Doug Hendrickson] has been in talks with Seattle, so like I said, we’ll see what happens. If it works out and I get back up there, it is what it is. And if not, s—, I’m lookin’ good. So I ain’t really trippin’ too much.”

The Seahawks are believed to be in search of another veteran running back, with starter Chris Carson and 2018 first-round pick Rashaad Penny coming off season-ending injuries. Carson (hip) is expected to be ready by Week 1, but general manager John Schneider reiterated recently that Penny’s recovery from knee surgery might sideline him beyond the start of the season. (via ESPN)

Free-agent RB Marshawn Lynch said his agent has been in discussions with the Seahawks about a potential return to Seattle.https://t.co/Nt7RvEHDXJ

“I ain’t really trippin’ too much” is exactly how I’d imagine Marshawn Lynch is feeling at the moment so it’s nice to see him confirm that. He has earned a cool $56,769,878 in salary throughout his 12 seasons in the NFL according to Spotrac.

I can’t imagine he’d ever come back for the money. If he’s coming back it’s because he’s hungry to play which is something we’ll never know because the guy is impossible to read. He sits in the 4th place spot in post-season rushing touchdowns which might be another reason compelling him to return.

For this full report on ESPN, you can click here.