Marvin Lewis Claims Carolina Panthers, Then Owned By Jerry Richardson, Put Him Through A Sham Interview 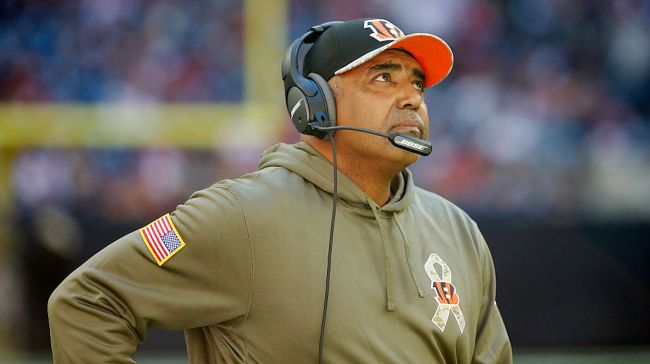 During an appearance on ESPN’s First Take on Wednesday morning, former longtime Cincinnati Bengals head coach Marvin Lewis said that the Carolina Panthers put him through a similar situation that Brian Flores is alleging he went through with the New York Giants.

On Tuesday evening, news broke that Flores was filing a lawsuit against the NFL, alleging that, among other things, the New York Giants put him through an interview simply to satisfy the Rooney Rule and that they already made their decision on who they were hiring when he interviewed.

Flores’ lawsuit includes alleged texts from New England Patriots head coach Bill Belichick, who appeared to accidentally congratulate Flores for landing the Giants job despite having not yet interviewed for it. Belichick then admitted that he meant to text Brian Daboll, the former Buffalo Bills offensive coordinator.

While on First Take, Lewis claimed to have gone through a similar sham interview when the Carolina Panthers — then owned by Jerry Richardson, who sold the franchise in 2017 due to allegations of sexual misconduct and racism — when they were searching for a new head coach in 2002. It should be noted that the Rooney Rule went into effect the following year.

Marvin Lewis says Panthers interviewed him for head coaching job after he knew the Panthers were going to hire John Fox pic.twitter.com/6gUdzNE7Fr

“I did interview with the Carolina Panthers before John Fox got the job [in 2002]. And I can recall that we had lost to the Steelers in the second round of the playoffs and I remember sitting home one Monday and Chris Mortensen or someone else, that Foxy [sic] would be named head coach of the Panthers on Friday,” Lewis told hosts Molly Qerim, Stephen A. Smith, and Keyshawn Johnson.

“And when I went in on Tuesday, Brian [Billick, then head coach of the Ravens] came in and said, ‘Hey, I just got off the phone with Ozzie [Newsome, General Manager of the Baltimore Ravens] and the Panthers want you to come down and interview for the job.”

I said, ‘Coach, I just heard last night on TV that they’re gonna name Foxy on Friday. So, he goes back and talks to Ozzie and talks to the people, and I end up going down to Charolette and so forth, and meeting with the Richardson family, and they said that [Fox being named head coach] wasn’t true, so forth. And they named John the head coach on Friday. I don’t know. Again, that’s the situation that I was in but you have to go and prove that you’re worthy to become the head coach. And you’re appreciative of the opportunity but what was supposedly going to happen ended up happening in that case, for sure.”

Given that it’s only been 24 hours since the Flores lawsuit became public, this could only be the tip of the iceberg for the NFL.