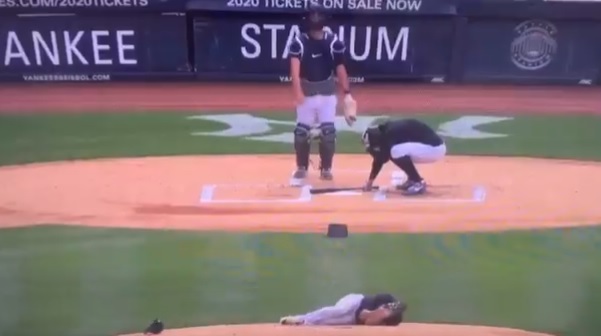 Not long after the Yankees opened their team workouts in The Bronx on Saturday, pitcher Masahiro Tanaka suffered a horrific-looking injury when he took a line drive to the right side of his head off during a Giancarlo Stanton at-bat.

Giancarlo Stanton just lined a ball off Masahiro Tanaka on the mound, appeared to go right off his head.

Scary scene as the training staff runs out on the field. pic.twitter.com/uw0po8AIVK

Tanaka immediately fell to the ground and trainers immediately rushed to the mound to check on his condition. The Yankees pitcher stayed down for about five minutes before being able to sit up.

He was eventually was able to walk to the clubhouse with assistance from the trainer. As of now, there has been no official update on Tanaka’s condition.

Tanaka is now gingerly walking off the field with assistance from the #Yankees training staff. That was really a scary moment. pic.twitter.com/FGMGasjGfB

Update: The Yankees released a statement on Tanaka’s current status.

RHP Masahiro Tanaka was hit in the head with a line drive during today’s sim game. He is currently alert, responsive and walking under his own power. He is being sent to
NewYork–Presbyterian Hospital for further evaluation and testing.

Update #2 Tanaka has been put in the concussion protocol by the team.

Aaron Boone said that Masahiro Tanaka went through a battery of tests at the hospital and is "doing well." Boone said that he's basically normal right now, and that he seems fine and his concussion-like symptoms are dissipating. Will follow concussion protocol.