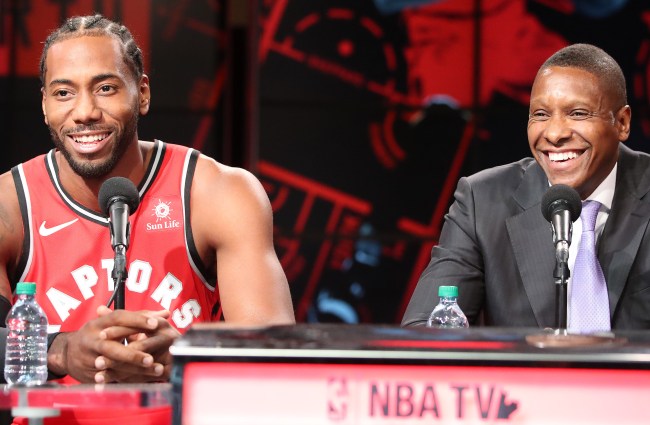 It’s been over a month since the NBA wrapped up the resoundingly successful experiment it conducted in Orlando to salvage a season that ultimately saw the Lakers take home the title after beating the Heat in a Finals series played inside the bubble constructed at Walt Disney World Resort.

The league went to great lengths to promote health and safety over the course of the 100 or so days teams were restricted to the isolated campus thanks to frequent testing, hefty punishments for any players caught violating the various rules in place, and strict regulations to prevent any non-essential personnel from making their way onto the premises.

While making the cut to gain access to the bubble was about as easy as getting on the list to bypass the line at Tao on Saturday night, a few journalists were lucky enough to get an invitation to cover what went down inside—including Taylor Rooks, who penned an expansive piece for GQ in which she provided a firsthand account of the many things that went down during her time there, where she was given ample opportunity to interact with players, coaches, and other figures from around the league.

This includes Masai Ujiri, the president of the Raptors and a dedicated Morning Person who usually set an alarm for 5 A.M. before he kicked off his morning routine, which involved doing a bit of reading before hopping on the Peloton he had inside his hotel room on the ninth floor of the Gran Destino before rounding out the rest of his workout prior to really kicking off his day.

However, it turns out the room Ujiri was assigned just so happened to be located directly above the one that former Raptor Kawhi Leonard was occupying, and unbeknownst to him, the man who signed with the Clippers in free agency after leading Toronto to a championship apparently spent a few weeks being prematurely roused from his sleep by Ujiri’s out-of-the-saddle efforts and the various other exercises that could be heard through the ceiling.

As Rooks recounts in the article:

He thought nothing of his daily ritual until one morning, several weeks into the bubble, when he got a text from another former player of his: “Morning boss, you good up there?”

The text was from Kawhi Leonard—Finals MVP with the Raptors, now a star on the Clippers—who was staying in room 850, directly below his old boss. Ujiri had been waking Kawhi up with his noisy workouts for weeks, but Kawhi was reluctant to say anything.

Ujiri told Kawhi that he would stop for the time being and joked that he would continue again when the Raptors met the Clippers in the Finals, messing with Kawhi’s sleep. Kawhi responded with the kind of trash talk that’s best read aloud in Kawhi’s dry monotone: “Haha, you know the saying ‘Don’t poke the bear’? I’m gonna call the NBA on you…get you out the bubble.”

This particular excerpt was initially brought to my attention by GQ editor Chris Gayomali, who highlighted some of the other particularly amusing anecdotes to come out of the experience. This included one that shed some new light on the Milwaukee Bucks’ George Hill, who missed the national anthem and eventually revealed his absence was the result of the deuce he traditionally drops before every game, as he apparently waits until the countdown clock hits six minutes on the dot before making his way to the porcelain throne.

like if you made a list of the most interesting things in here, no. 27 would be George Hill revealing his pre-game poop routine: pic.twitter.com/2w6m2vtxzl

As Gayomali mentions, that’s only a small taste of everything the article has to offer, so I’d highly recommend giving the entire thing a read as soon as you can find some time to devote to it.