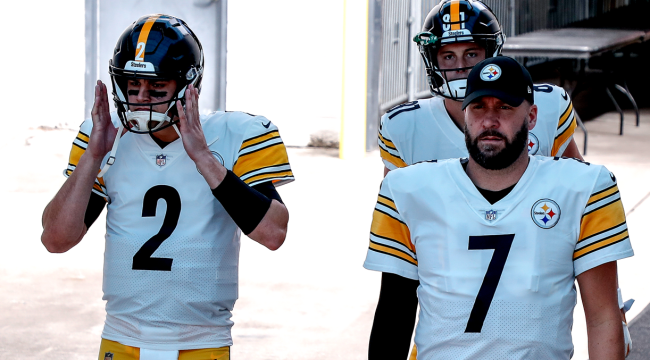 This week, Pittsburgh Steelers quarterback Mason Rudolph was asked if he was going to help mentor rookie Kenny Pickett. He said that he would, scaring the bejeezus out of many Steelers fans in the process.

The 26-year-old Rudolph will be entering his fifth NFL season this fall, and he will have competition for the starting job recently vacated by Ben Roethlisberger from the rookie Pickett, as well as new Pittsburgh acquisition Mitchell Trubisky.

Rudolph said when asked if he was going to help out the new guys, as opposed to being…

“Being like someone else?” Rudolph interjected, making a razor thin veiled reference to the now retired Roethlisberger.

Back in 2018, when the Steelers drafted Mason Rudolph, the 2017 Johnny Unitas Golden Arm Award out of Oklahoma State, Roethlisberger was very clearly annoyed by the third round pick.

“I was surprised when they took a quarterback because I thought that maybe in the third round, you can get some really good football players that can help this team now. And nothing against Mason, I think he’s a great football player … I just don’t know how backing up or being the third guy, who knows where he’s going to fall on the depth chart, but helps us win now,” Roethlisberger told KDKA’s Cook and Poni show after the 2018 NFL Draft.

Roethlisberger also said that if Rudolph came to him with any questions he “might have to just point to the playbook.” Later, he claimed that it was said in jest.

“We’ve probably all been in situations, whether it’s high school, college or pro, where we’re the incumbent starter, and there’s a new freshman, there’s a new rookie, there’s a highly recruited guy,” the Pittsburgh Post-Gazette reports Rudolph said Wednesday after practice. “I’ve always believed in, the starter shouldn’t have to go out of his way, because he’s got a lot of things to deal with. But definitely be open to questions and help the growth and development of a younger quarterback, yeah.”

Pickett says he hasn’t had any trouble from the other two quarterbacks so far.

“We’re all learning,” said Pickett. “I’m learning, and I’m just kind of attacking each day. I think you guys make a bigger deal out of the competition than the players do, because we’re competing every single day, regardless.”

Many Steelers fans, on the other hand, haven’t been so nice when commenting on the team’s quarterback sitation.

I’m getting tired of Mason Rudolph taking not so subtle shots at Big Ben. We get it. Ben didn’t go all out to help Mason. But that’s not the reason Rudolph’s career is at a crossroads. pic.twitter.com/nffqvC2TJH

Mason Rudolph having another dig at Ben! Saying that unlike "someone else" he'd be there to answer questions from a rookie QB. Why does he feel the need now to have a veiled go at Ben. Ben is a million times the man and QB Mason will ever be. Its sour grapes from Mason. pic.twitter.com/xUsVblbojg

“No disrespect to Mason Rudolph” 💀pic.twitter.com/4FkkqKSWbO