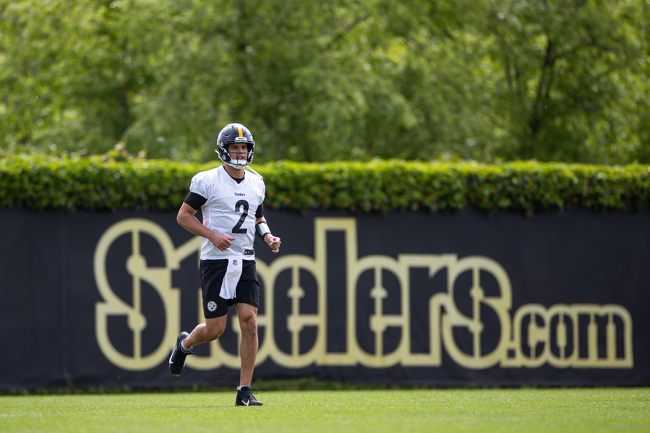 The Steelers quarterback room is deep, but not necessarily the most talented. That doesn’t mean that there aren’t some good, but not great signal-callers in Pittsburgh that could provide valuable depth for another franchise.

As things currently stand, it seems as though Mitchell Trubisky will be the starter come Week 1. Behind him, Mason Rudolph and Kenny Pickett are battling for the second-string position on the depth chart. There is a lot of time for things to change and one of the latter two could beat out the former over the next few weeks.

However, it would be surprising if Trubisky is not the guy at this point. That leaves Rudolph and Pickett as the backups, unless one of the two gets moved.

Obviously, after drafting him in the first round, Pickett is not going anywhere. But Rudolph may be headed elsewhere sooner than later, according to Andrew Fillipponi, who “talks about sports in Pittsburgh on 93.7 The Fan” and can be “heard on CBS Sports Radio and seen on CBS 2.”

He says that he has been told that Rudolph could be shipped off to Detroit. And soon.

A former NFL GM told me he thinks Mason Rudolph could be traded to the Lions by the end of the week.

The Lions have Jared Goff penciled in as the starter, but there are question marks around the backups. David Blough and Tim Boyle were not impressive in the first preseason game of the year and did not inspire any confidence.

After the game, head coach Dan Campbell spoke about their performances.

“Both of them, I thought made some really good plays, man,” he said. “But, then there’s a couple of these plays that leave a bitter taste in your mouth.

“Certainly, the interception that Tim had, he didn’t quite lay out in front enough. And then the snap — the exchange there, the critical play there in the red zone by Blough. Those two hurt you, man, and that’s kind of what all this is about at the end of the day, you know. You do a lot of good things, but those will bite you.”

Perhaps Rudolph, who has proved himself as a fairly reliable backup, could be the piece that is missing behind Goff. Only time will tell if the prediction is true.