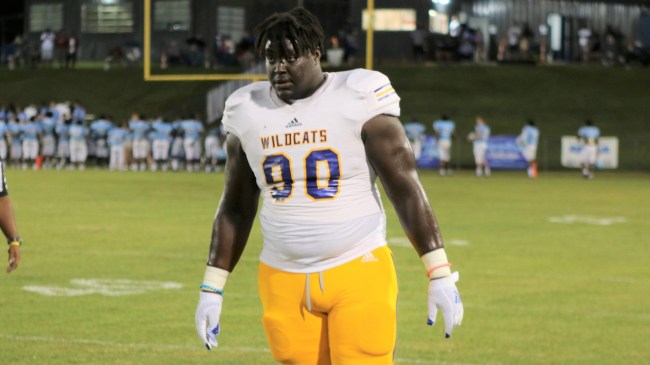 Jaheim Oatis is Columbia (Miss.) High School’s star kicker and has a huge leg. But here’s the thing— because this is small-school ball in Mississippi, he also plays defensive tackle. Listed at 6-foot-5, 349 pounds on his 247 Sports recruiting profile, the athlete they call “Beast” is the class of 2022’s 76th-ranked recruit and has offers from LSU, Alabama, Georgia and Mississippi State. When he steps onto the field, he is a man amongst boys.

When you think it's about to be a sweet night then BOOM!!!! #BEASTWALKSOUT pic.twitter.com/UOCafX0V0z

There isn’t much technique to his kickoffs, but the size and power of Oatis’ lower body drives the ball deep downfield. And if the return man gets loose, the Wildcats’ kicker is not a typical last line of defense. Hazelhurst High School found that out the hard way in last week’s playoff game against its in-state Class 3A MHSAA First Round opponents.

Oatis drove his kick to about the 15-yard-line, where the Indians’ return man couldn’t corral the loose ball. He scrambles to recovered the muffed kick around the goal line and takes off upfield before he wiggles his way through a pile of would-be tackles and breaks down the sideline looking for paydirt. To his demise, he is met by the state’s top defensive tackle. Oatis flies in like a freight train from off of the screen and lays an absolute slobberknocker to stop the returner in his tracks.

To put his absolute mammoth size in context, here is Oatis next to LSU head coach Ed Orgeron. 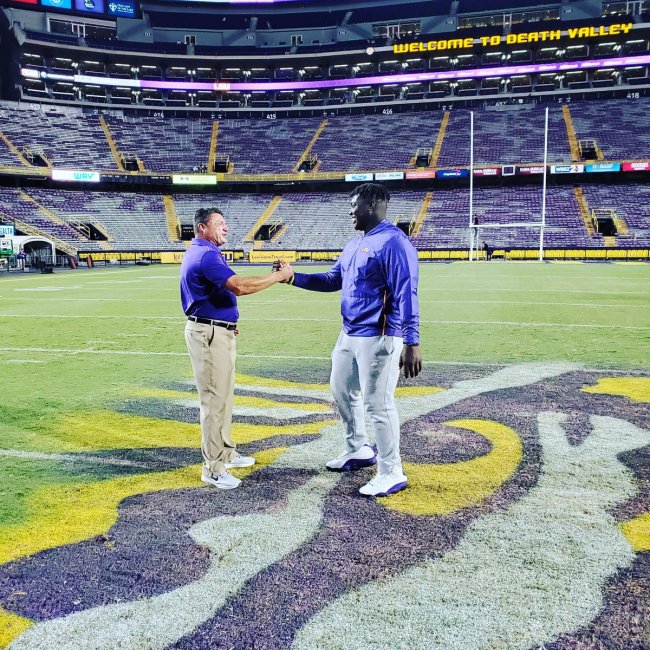 If that isn’t frightening enough, the now 17-year-old was running a 4.7-second 40-yard-dash at 280 pounds in seventh grade.

Columbia won its matchup with Hazlehurst 28-0 and will move on to the second round. For his opponents sake, let’s hope they call a fair catch.