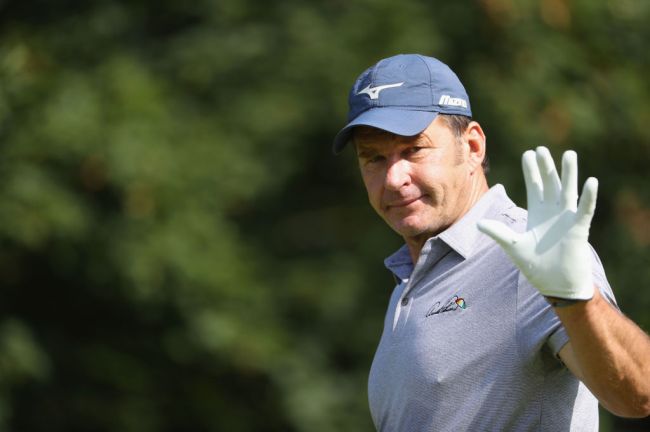 Bryson DeChambeau is going to try to abuse and overpower Augusta National just like he did Winged Foot in September to win the U.S. Open. He’s going to be hitting approach shots from places we’ve never seen another player hit from, and Jack Nicklaus even suggested that he could drive the first green.

The first hole at Augusta National plays uphill and stretches to 455 yards, so DeChambeau driving the green would be beyond unbelievable. The course could also be playing longer this year with rain in the forecast.

Three-time Masters winner now golf analyst Nick Faldo was asked about the possibility of DeChambeau accomplishing that feat and, let’s just say, he doesn’t see it happening. He even went as far as to say that he’d run around the course naked if DeChambeau drives the first.

“Bryson will not be driving the first at 445,” Faldo explained, according to Golf Digest. “If he does, I will leap out my tower and run around naked round Augusta National.”

So, even if you’re not a big DeChambeau fan, you now have a reason to root for him to drive the first green. Seeing Faldo run around Augusta naked would already turn this year’s extremely unique Masters into something we’ve truly never seen before.

DeChambeau could be pushing things to the literal limit this week with a 48-inch driver in the bag. He hasn’t yet decided on whether or not he’ll be putting it in play, but he was testing it out on the range at Augusta on Tuesday and Wednesday.