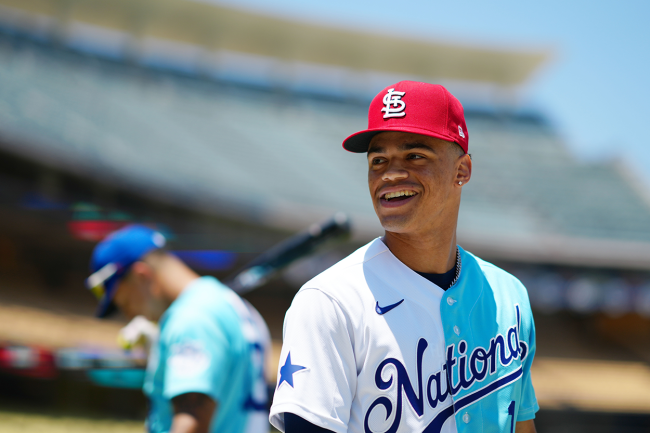 Masyn Winn is the hardest throwing MLB infielder of all-time and he isn’t even in the MLB yet. The 20-year-old Cardinals prospect is ranked 89th in the official MLB prospect rankings and his stock only continues to rise.

Winn’s arm is his most wow-worthy tool and he showed why over the weekend.

After being drafted in the second round of the 2020 MLB Draft, Winn signed above slot value for $2.1 million. Saint Louis is very high on his potential and he was a legitimate two-way player out of high school.

Since starting his professional career, Winn has focused-in on his future as an infielder. Specifically, he is playing shortstop for the Springfield Cardinals, the club’s Double-A affiliate and his 2022 season has been impressive.

Winn was named the starting shortstop for the NL in the All-Star Futures Game and quickly became the biggest storyline of the evening.

On Thursday, Pirates shortstop Oneil Cruz recorded the fastest Major League infield throw in the Statcast era and hit 97.8mph with his throw to first.

Oneil Cruz has a CANNON! It's the fastest throw recorded by an INF in the Statcast era. pic.twitter.com/NdIukHQxNW

Leading up to the Futures Game, Winn was asked about whether he could surpass Cruz’s mark. He went so far as to say that he might do it in the game on Saturday.

After calling his shot, Masyn Winn followed through.

During Saturday’s Futures Game, the Cardinals’ fourth-ranked prospect fielded a ball between second and third, set his feet, and threw a 100.5mph laser across the diamond to beat the runner at first.

It was the fastest throw by an infielder in the statcast era, which is almost certainly the fastest infield throw of all-time. Unless Honus Wagner was out there throwing gas.

We used to get up for pitchers hitting 100mph on the gun and Winn did it as a shortstop. After calling his shot. Insane!