Mexican Bullfighter Gets Plugged In The Butt By An Angry 1,160-Pound Bull’s Horn

Part of being a bullfighter is putting your body in harm’s way every time you step into the arena. Sure, as a torero/matador you’ve got the ‘picadores’ who ride out there before you and stab the bull with spears to tire it out and make your job easier. But when you finally step into the ring as a matador you’ve only got your sword and cape for distracting a really, REALLY pissed off bull.

Sometimes the spears from the picadores aren’t enough to tire that bull out, and the 1000+ pound bulls are willing to fight for their lives. In the clip above, Mexican torero/matador Antonio Romero either let his guard down or squared up against a bull that wasn’t ready to submit to death, and he ended up taking a fucking horn to the rectum.

Let’s see that bullfighting mishap once more in GIF:

Here’s a Google translation of what happened to Antonio Romero’s ass (via Deadspin):

Over on Univision, they’ve got the real MONEY shot isolated in their video screen cap: 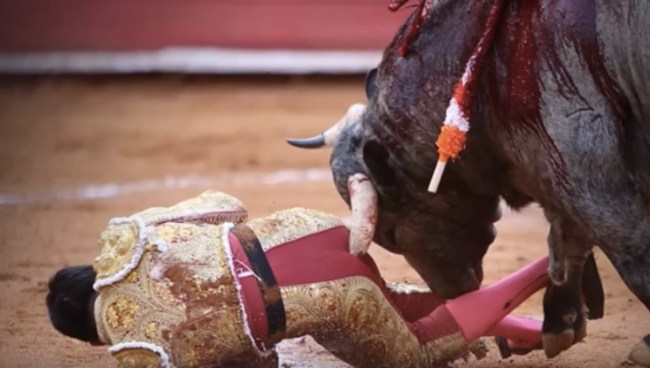 There’s not a thing on this planet I’d actually want forcibly inserted into my butt. But, if I had to rank all of the things I’d least want to happen to my anus I think ‘speared in the booty hole by an angry 1,160-pound bull’ would rank near the top alongside ‘molten hot lava’.