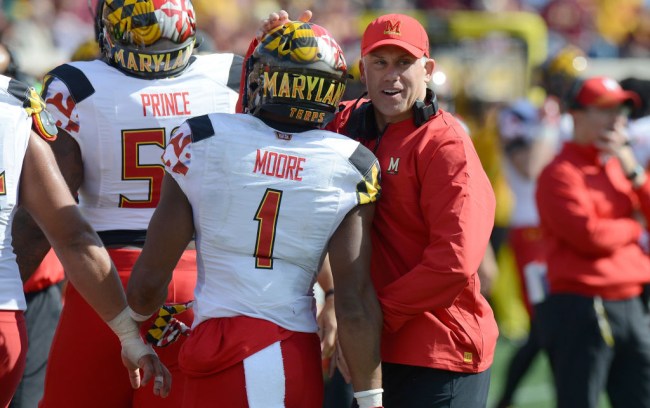 The current situation at the University of Maryland is a tragedy of errors stemming from the death of former football player Jordan McNair, an offensive lineman who collapsed from heat stroke at practice before ultimately dying two weeks after.

At the center of the controversy is (former) head coach DJ Durkin, who was accused of being complicit in the death in addition to creating a toxic environment that the incident helped shed further light on.

McNair’s father Martin made it very clear regarding how he felt about Durkin a few months ago while investigations in the case were still ongoing:

“He shouldn’t be able to work with anybody else’s kid.

Last week, a report was released that outlined how truly out of things at the program had gotten— like this fun little tidbit:

“According to Gus Little, this included videos of serial killers, drills entering eyeballs, and bloody scenes with animals eating animals.”

It was not exactly the best look for Durkin and also not a great look for Maryland, who decided to do the right thing and reinstate him as head coach on Tuesday.

After the move caused the outcry everyone besides the University of Maryland saw coming, the school backpedaled and fired Durkin on Halloween.

And in case you’re wondering, Darren Rovell does have a tweet about it.

However, it looks like there are some Durkin loyalists on the squad based on a report claiming Terrapins kicker Matt Barber got the shit kicked out of him by his teammates at practice on Tuesday for having the nerve to aid in the investigation.

“Toward the end of the practice, another player attacked Barber, attempting to punch him in the face, Barber said. While the two teammates were fighting, others tried to intervene and grabbed Barber’s arms behind his back, he said. That allowed the other player to punch Barber repeatedly in the face, leaving him with a black eye, needing multiple stitches on his forehead and a dislocated shoulder, Barber said.

‘My jersey was bloody,’ Barber says. ‘I had blood all over my hands.'”

Glad to hear Maryland has things under control.