Matt Cassel Reveals How Big Of A Loose Cannon Todd Haley Was On The Sideline, Haley Responds With KO 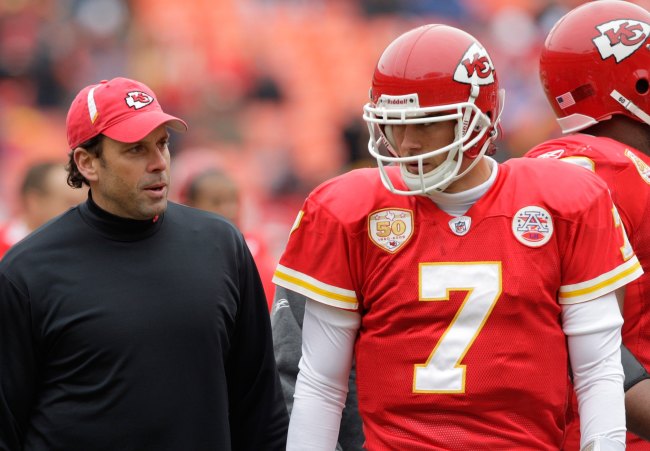 For every player’s coach, there’s a guy whose definition of motivation is to manufacture chaos.

For every Mike Vrabel, there’s a Todd Haley.

The former Chiefs head coach and current offensive coordinator at a Sarasota, Florida high school has never shied away from locking horns with star players. From Kurt Warner to Anquan Boldin to Terrell Owens, Haley has gone on record touting his antagonistic style: “I’m not a players’ coach. I coach hard. That’s the way I was taught.”

Matt Cassel, who was the quarterback under Haley’s regime from 2009-2011, was not down with it.

The journeyman QB appeared on NBC Sports Boston and revealed how Haley’s brash personality and stubbornness actually affected the outcome of games. Important ones.

Matt Cassel had a WILD story about getting coached by Todd Haley.

Transcribed by the Kansas City Star:

“That’s when Todd Haley was at his craziest,” Cassel said. “The man was nuts on game day and I don’t know why. Here’s a great example of that: we’re playing the Tennessee Titans late in the year, this is for the divisional lead and to actually win the division, and throughout the course of the first part of the game, they kept bringing Blitz Zero.

“Blitz Zero is max pressure; I was checking out. (Offensive coordinator) Charlie Weis gave me that ability to do so, and we were throwing the pass. So, every time I came to the sidelines throughout the first half, Todd Haley is screaming at me. He’s yelling at me, ‘Just run the ball.’ I’m like, ‘We talked about this. We can’t run the ball into everybody pressuring right into the run so we’re gonna throw it.’

“Well he got heated as the game went on. Finally, it was a third quarter, I’m coming off the field he’s screaming at me for pulling up on the boot. And I said, ‘Oh, Todd, like you ever played the position.’

“My bad. It was my fault, my frustration took over. So, I go on the sideline he still coming over yelling at me. We had a little bit of a dispute over there and he benches me. He benches me … at the end of the third quarter, and he says ‘Brodie you’re in,’ and he’s being dead serious.

“Well, I took the liberty to run back out on the field. Well (Haley) wouldn’t give me a play in my helmet. He would not give me a play in the helmet. Then he sends Brodie back out on the field, Brodie two plays later throws an interception. Now everybody’s mad at Todd Haley, and then he literally said, ‘You’re not going back.’ He told the coaches to tell Cassel he’s not going back in the game.

“So again, as a team captain I thought it was my obligation to run back out on the field, Again, he wouldn’t give me a play in my helmet. So I had to call my own plays in the helmet for the first three plays. Eventually, we ended up getting a score on that drive, we won the game but I’ll tell you what, it was disruptive to say the least.

“… Every single person on the sideline from offensive linemen to the wide receivers were also kind of yelling at Todd at that point saying, ‘What are we doing right now?’” Cassel said. “I mean, it was the end of the third quarter, yes we had an established lead at that point probably 14 points but that can go away quickly In any ballgame.”

If you thought Todd Haley would let Cassel’s comments roll of his back, well, you’re living in an alternate universe.

Coaching is coaching. MC had his best year of his illustrious career with me! Not always fun but key is to get the best out of “the” player. #woody #toystory https://t.co/zpvFRzJxjm

It’s one thing to sarcastically call Cassel’s career ‘illustrious,’ but it’s a whole other level of demolition to call him a Pixar doll who’s afraid of spiders.

Man Matt Cassel and Woody from Toy Story look a lot alike to me pic.twitter.com/kDdGfhHp1m