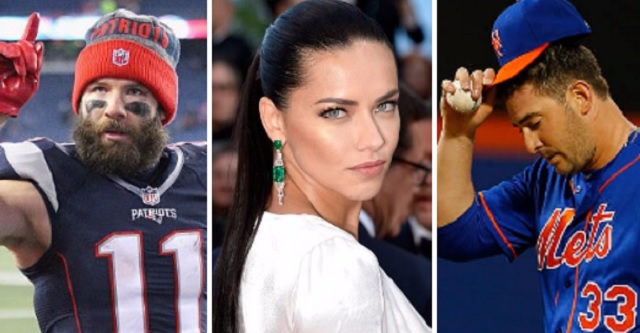 Earlier today it was reported that Harvey was out partying on Cinco de Mayo at 4am and couldn’t get up to go to the game because he was extremely hungover.

Now Page Six is reporting that Harvey was out drinking because he was depressed about seeing his ex-girlfriend Adriana Lima getting cuddly with Pats star Julian Edelman at the Met Gala the night before.

Mets pitcher Matt Harvey skipped Saturday’s game and got himself suspended after seeing pictures of his supermodel gal pal out partying with another man, sources told The Post.

Both the Victoria’s Secret stunner and the Patriots wide receiver — with whom she had broken up several months earlier — wore grins on their faces like they were having the time of their lives.

Inside the party, Lima and Edelman were “flirty,” Post sources said. And, to add insult to injury, Lima unfollowed Harvey on Instagram after the event.

Apparently, Harvey was unaware that Lima was just not as into their relationship as he was.

“Adriana’s relationship with Matt was never serious,” a source said. “They are no longer seeing each other.”

Harvey got hammered again early Saturday morning, when he went to the Meatpacking District hot spot 1 Oak — the same club where Lima and Edelman were photographed — and partied until 4 a.m.

The feeling among other players on the Mets was that Harvey was out Friday night blowing off steam and trying to get over Lima, baseball sources told The Post.