Fill-In Caddie Breaks Silence About How Little He Got Paid From Matt Kuchar’s $1.2M Tourney Win 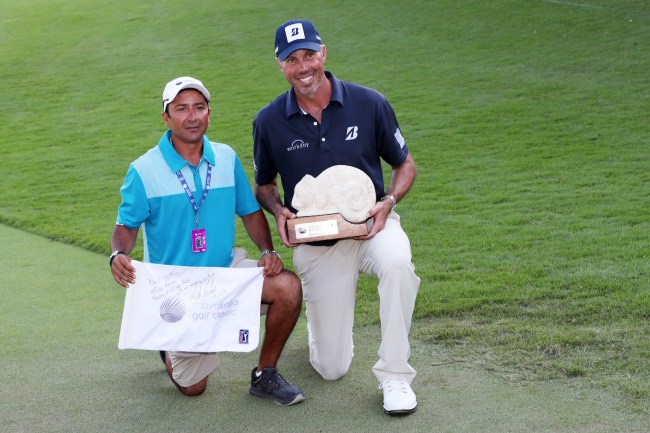 Being a stand-in caddie for PGA pro Matt Kuchar would be a dream come true for most people. For David Giral Ortiz, the entire ordeal has been a drain on his mind and his wallet.

Here’s how it all went down – back in November, Kuchar hired a stand-in caddie for the Mayakoba Golf Classic. Ortiz was a last-minute replacement for Kuchar regular caddie, John Wood, who couldn’t make the tournament for personal reasons.

Nicknamed, “El Tucan,” Ortiz handled the bag while Kuchar shot an impressive 22-under over the four days in Mexico. The Mayakoba Golf Classic was Kuchar first tournament win since the 2014 Heritage Classic.

His nickname is "El Tucan."

Now here’s where things get uglier than my short game.

According to Golf Week, the average caddie usually earns anywhere from 5-10% of a player’s winnings (not counting a possible salary). Even if Kuchar went low with 5%, Ortiz should have walked away with a check for $60,000.

Allegedly, Kuchar didn’t come close to that number and Ortiz is spilling the tea after months of silence.

David Giral Ortiz, the diminutive Mexican caddie who goes by El Tucan, said in a recent phone interview that after being paid $5,000 by Matt Kuchar on the Sunday evening after the golfer won the Mayakoba Golf Classic on Nov. 11, he has not received any other payment.

The caddie said he was offered an additional $15,000, for a total of $20,000, but that he found that unacceptable. He also said he would not want to work for Kuchar at next year’s tournament.

So far, El Tucan has only taken the original $5K and turned down the second payment of $15K.

“No thank you,” the 40-year-old father of two told Golf.com. “They can keep their money.”

In response to an email from GOLF.com to Kuchar and Steinberg seeking comment, Steinberg wrote on Monday, “The “reports [sic] on what Matt’s caddie was offered are wildly inaccurate. However, it is inappropriate to discuss those amounts publicly.”

Ortiz went on record as stating that he felt $50K for the work is more than fair, especially considering Kuchar has earned over $46 million in prize money in his career and ranks 10th on the career money list.

Ay dios mio, this is ugly.