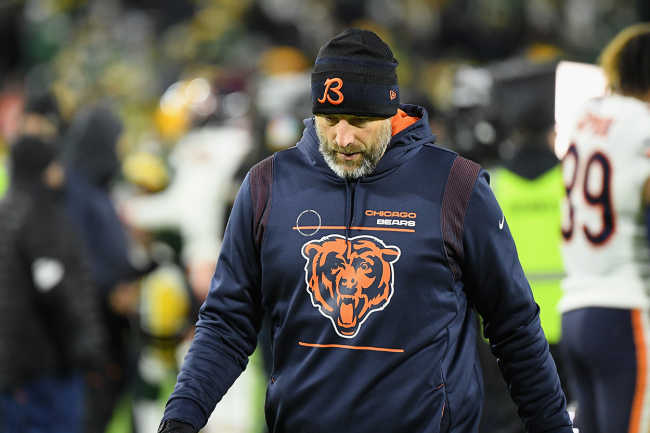 The Chicago Bears lost by 15 to the Green Bay Packers on Sunday Night Football, but it didn’t necessarily have to be that way. Head coach Matt Nagy made a terrible decision to punt in the fourth quarter and has since admitted it was a mistake.

Nagy, who is sitting on a very hot seat, might have made his final misstep on Sunday.

Chicago had the ball on their own 36-yard-line on 4th-and-inches with 13 minutes and 31 seconds left in the game, down by 11. Instead of running a quarterback sneak, handing the ball off to the running back and having him fall forward, or attempting any kind of conversion, Nagy sent his punt team onto the field.

It was a bad decision.

He's made some bad calls as #Bears head coach, but Matt Nagy deciding to punt on 4th-and-inches down 11 in the 4th quarter was one of his worst.

The total lack of urgency or a desire to win shown in that play still haunts me. It was blatantly obvious that was the wrong call.

He chose to play it safe against the NFC’s top team, on the road, in a game that the Bears could not afford to lose. However, Nagy almost got away with it.

Green Bay’s kick returned muffed the punt and Chicago running back Damien Williams recovered. Except there was a penalty on the play and it nullified the turnover.

The Bears were flagged here for “going out of bounds” on the punt and not “immediately” coming back in, which nullified a Packers muffed punt #CHIvsGB pic.twitter.com/ldPpXzO9jp

With a second chance to go for it on 4th-and-5, Nagy again chose to punt. Aaron Rodgers and the Packers took over, led an eight-minute and 38-second touchdown drive to all-but put the game away.

After the game, Nagy said that he considered going for it, but he chose field position instead. He didn’t want to give Rodgers a short field to score points, so he punted and Rodgers scored points on a long field instead.

The 43-year-old, third-year head coach was roasted for his decision by literally everyone. And after 24 hours to think on it, even he too regretted the punt.

Matt Nagy admitted today that he should have gone for it on 4th-and-inches in the fourth quarter with his team down 11 points:

"You wish you would’ve went for it. That’s the part where you look back as a coach and you go, 'Damn, that would’ve been a time to do that.'"

Too little too late. The 4-9 Bears have a very steep, nearly impossible climb to the playoffs and Nagy is almost certain to lose his job if not now, then at the end of the season.

All he had to do was not punt and maybe, just maybe he could have saved the season and kept his job. But he punted.