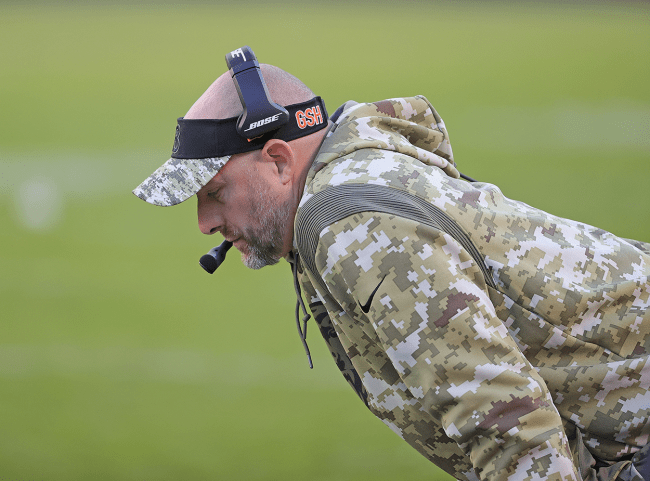 Matt Nagy is 31-27 in his four years as the head coach of the Chicago Bears. He has never advanced out of the NFC Wild Card game and has not finished over .500 in either of the last two seasons.

As of right now, that notion is not going to change in 2021. Thus, Nagy is firmly on the hot seat.

Over the weekend, after a heartbreaking loss to the Ravens, Bears fans chanted — very loudly — for Nagy to be removed from his role. According to a recent report, the fans are not the only ones.

Insider/analyst Jordan Schultz is reporting that most of the Chicago players want him gone too.

An overwhelming number of #Bears’ players want Matt Nagy gone, league sources say. “He lost some of the locker room last season, but now it’s gone,” one source adds. One key holdup: No HC in the 101-year franchise history has ever been let go during the season.

Schultz, who is a man of many hats, co-hosts a podcast with wide receiver Allen Robinson. Robinson, of course, is a wide receiver for the Bears.

Although Schultz did not cite who his “league sources” are, he is undoubtedly in the loop. For him to say that an “overwhelming number” of players want Nagy gone is a claim that certainly requires legitimate footing.

In addition to Nagy’s seemingly inevitable removal, Schultz imagines that general manager Ryan Pace will also be fired at the end of the season.

Hard to imagine a scenario where GM Ryan Pace survives as well. Pace has been given full reign and made the lion’s share of mistakes, inc hiring Nagy. The #Bears, under his guidance, have the NFL’s eighth-worst record (45-61) during his seven seasons.

With seven games remaining in the season, it will be interesting to see whether Chicago makes a decision now or waits until the end of the season. The Bears will play the Lions on Thanksgiving. Losing to a winless Detroit team would certainly be the icing on the cake.