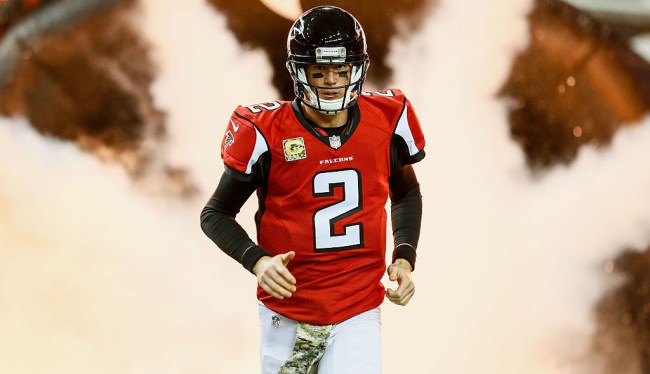 Quick story about my personal relationship with Atlanta Falcons quarterback Matt Ryan, which is far more specific than you probably realize (and than it should be).

Ryan, now 35-years-old, was drafted with the third pick in the 2008 NFL Draft. My New York Jets, three picks later at the #6 slot, drafted one of the all-time busts in modern history by selecting Ohio State University linebacker/defensive end Vernon Gholston.

Yikes, exactly. And the reason I remember this is all is that the Jets owned the sixth draft pick and not the third is because they defeated the then-equally-awful Kansas City Chiefs in an overtime 13-10 win during Week 17, improving their record from 3-13 to 4-12, bumping them down three draft spots. 13 years ago and I literally remember that game and my anger from it. So, those are my memories of the New York Jets, just in case you needed a glimpse into how truly miserable rooting for them is.

Point being, I always felt that Ryan was the quarterback-that-got-away and have therefore always rooted for the guy, who, by all accounts, seems to just get it — just this morning, Ryan announced that he was launching a fundraiser to “help improve the community for people of color in the city of Atlanta.”

Last week I made a commitment to listening and learning, and one of the messages that hit home for me was the difference between reacting to a situation and responding to a situation. For far too long I have reacted to social injustice with empathy and silent support but failed to follow through with active support. I feel the time has come to RESPOND. For ALL of us to respond.⠀
⠀ ⠀
I see my city hurting, which is why I’m starting a fundraiser to help improve the community for people of color in the city of Atlanta. I’m kicking it off with a $500K donation and am asking you to consider donating as well. Whether big or small, you will be joining me in making a difference.⠀
⠀ ⠀
Over the next few weeks/months I’ll be really listening to the needs of the community and working with black business leaders, sports figures, activists and local grassroots organizations to get guidance on how these donations can be most impactful. Let’s rise up as a community. It’s time.