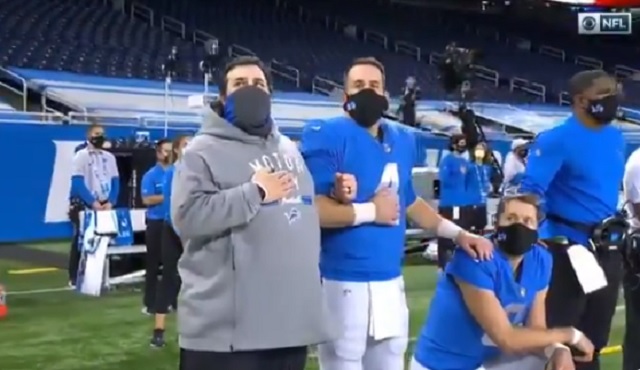 All season long Lions QB Matt Stafford has been kneeling for the national anthem and has spoken about his reasoning to kneel several times this year as well.

Matthew Stafford for the @PlayersTribune

Here’s Stafford talking about kneeling during the first game of the season.

Despite his previous comments, fans were still surprised to see Stafford kneel during the anthem during the Lions Thanksgiving day game.

Wow! Matt Stafford kneeling for the anthem on #Thanksgiving2020

I know there are very few but those of you who are following me or anyone else who sees this tweet. I just sat down to watch the oldest Thanksgiving tradition in the NFL. I turned it off a moment later. Matt Stafford took a knee for the national anthem. So screw it!

It took Matt Stafford taking a knee during the anthem for politics to inevitably enter this years Thanksgiving. Who’s ready for some football!!!

And lots of us immediately turned the tv off.

I have a message for Deshawn Watson and Matthew Stafford. Next time you disrespect my anthem by kneeling, remember why you get to play a game for millions. From a hard working, patriotic American.

For those crying about Matt Stafford and others kneeling during the national anthem have no f*cking clue what it truly means to be a free American.

They actually think complying and not protesting what you believe is wrong is freedom.

This is American Freedom 👇 pic.twitter.com/hQ4H2H9mkY