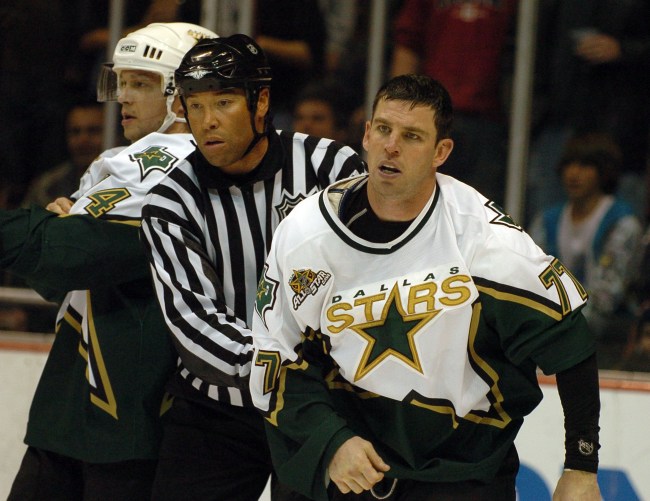 Yo I’ve never been to Nashville but I’ve been working on the internet long enough to have an opinion. Nashville is just bridesmaid parties trying to take group selfies while Tanner and Brock assault each other outside a late night barbecue joint playing live country music.

If you have a different opinion, keep it to yourself or explain why Matthew Barnaby was arrested for choking a bouncer and his mugshot looks like he ain’t finished.

This mugshot just stole my lunch money and up a flagpole.

The Scoop Nashville reports that the 14-year NHL journeyman was was booked into the Metro Nashville jail at 1 a.m. Thursday and charged with choking a bouncer at Nashville Crossroads bar on Broadway in downtown Nashville.

Once on scene, security from the venue advised that an altercation broke out between Matthew Barnaby, his girlfriend, and other patrons of the bar.

A bouncer at the location, Tyler P. Hardy, says he was choked by Barnaby during the altercation and wanted to prosecute. Matthew Barnaby was taken into custody and charged with assault and public intoxication. He is free on pre-trial release and scheduled to appear in court later this month.

It's been nearly a decade since Matthew Barnaby was ESPN's rising NHL analyst star and dating Michelle Beadle. He eventually lost the ESPN job over a DWI, the Beadle thing ended & here we are all these years later.

The 46-year-old was a part the SiriusXM NHL podcast at DeanBlundell.com. Following the news breaking about Barnaby’s arrest, editor Dean Blundell claims the hockey vet’s ‘issues’ led to their parting of ways.

I love Matthew but he’s a wildcard and I have to think there’s some serious soul searching going on right now.

I’ve only been around Matthew sober.  I love the guy but he had some issues a few months ago, so we parted ways.

He’s a father and a friend to many and he’s sick.   Pray for the cat before you judge him,

Barnaby’s fight against Jason Doig years ago still remains in my memory. The dude is literally Joker-laughing in between punches.

If I’m a bouncer at a Nashville establishment, I’m letting this dude drink for free and maybe take my wife home.