‘Minister Of Culture’ Matthew McConaughey Was Back On The Texas Bench, And In The Team Huddle! 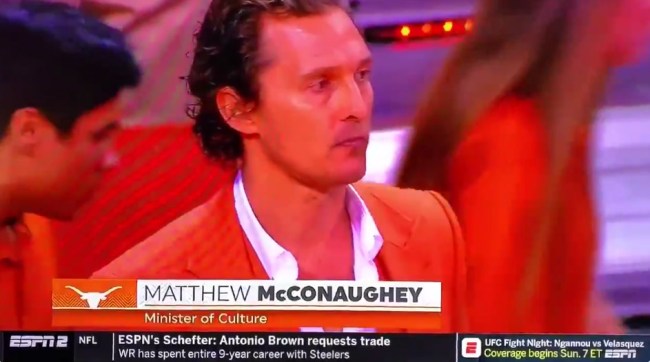 It’s good to be Matthew McConaughey. Who else in this world marries a model, wins an Academy Award, and gets issued the title of Minister of Culture at the university where he graduated.

Yes, that’s McConaughey’s official title with the Texas Longhorns. Which means that the 49-year-old actor gets to hang out on the men’s basketball team’s bench, right there alongside the coaches.

In fact, it would seem that not only does McConaughey get to sit with the coaches, he even gets to tell some of the assistants where to sit.

Texas ladies want to be with him. Texas gentlemen want to be like him. Ladies and gentlemen, for your viewing pleasure: “The Minister of Culture” for Texas #Longhorns basketball, Matthew McConaughey. pic.twitter.com/Pqp9m0N38j

Back in January, McConaughey explained to Stephen Colbert what his duties as Minister of Culture entail.

“Really, my goal, my purpose as the ‘Minister of Culture’ is to have that arena be the last place any visiting basketball team wants to play,” explained McConaughey. “And the first place that any world-class large band, act does want to play.”

Wooderson even gets to join in on team huddles during the game.

Why is Matthew McConaughey in the Texas huddle? 🤣 pic.twitter.com/aDXWReg7Mp

Unfortunately, the Longhorns were defeated by Kansas State 71-64, their fourth loss in the past seven games. Looks like McConaughey has more work to do.

Twitter reactions to McConaughey being on the Longhorns’ bench (and in the team huddle) have been priceless.

Can we all agree how weird it is Matthew McConaughey sits on Texas’s bench? As a player I feel like it would make me nervous?

Wait just a second. Matthew McConaughey actually SITS ON THE TEXAS BENCH DURING GAMES?!?! Does he also drive the team to practice in his Lincoln?

Only watching his Texas game to see matthew mcconaughey’s intensity

I get that he’s the Minister of Culture, or whatever Matthew McConaughey is at Texas, but it’s ridiculous that he’s sitting on the bench and leaning in on huddles.

Texas: what do u want?

McConaughey: I want to be called the ‘minister of culture’