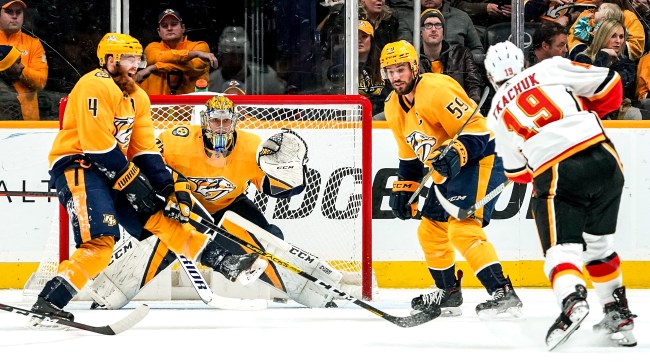 The Calgary Flames were in Music City on Thursday night to face the Nashville Predators. That’s a tough road game for any team because the Preds have been competing for the Western Conference title for several years now and always put up a tremendous fight at home.

The Flames took the game 6-5 despite having nine less shots than the Preds. They won thanks to an Overtime goal from Matthew Tkachuk that was so filthy I think I need to take a shower after repeatedly watching this thing on .25-speed on YouTube.

At full speed, the clip is wild. You can clearly see the nastiness that Tkachuk pulled off by firing the puck between his legs for the game-winning goal with less than a second on the clock before the game would’ve been settled in a shootout. But if you mess around with your YouTube speed settings and slow the video down then you can really appreciate how saucy this game-winner was.

SportsNet has the action with a clip that shows this stanky goal from several different angles so you can really let it sink in. Check it out:

Not that it really matters at all because we’re barely a month into the season and the standings are all over the place. I meeaaaan, Buffalo’s in 2nd place in the Atlantic so take this stuff with a grain of salt, but Nashville’s sitting in 2nd place in the Western-Central with the Flames occupying the 2nd Wild Card spot in the West right now.

For his part, Matthew Tkachuk is tied in 20th right now amongst all NHL players with 13 points so far this season. The Flames have been a really fun team to watch over the past few years and I feel like I can say that safely because I’m a Tampa Bay Lightning fan and nothing the Flames does conflicts with my team. So I’m stoked to see what they do in the Western Conference this season.