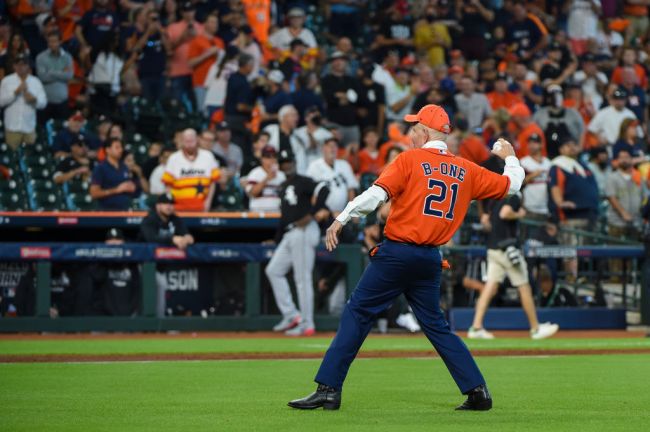 Mattress Mack has made a habit in recent years of throwing tons of money down on major championship games. Actually, it might be more accurate to say that he’s made a habit of throwing away money on big games.

He’s has lost millions of dollars betting on the Houston Astros to win the last few World Series, including $3.25 million this season. He has bet millions on each of the last 3 Super Bowls, only correctly picking the Buccaneers win last year.

Mack has even tried his hand at college sports. Last year, he bet on Houston to win March Madness after they made it to the Elite 8. They lost in the Final Four. A couple of months ago, he bet a total of $6.2 million on Alabama to win the College Football Playoff and lost.

Now he has once again turned his attention to a college championship game. To date, he has wagered $8.86 million on the Kansas Jayhawks to win the championship.

Mattress Mack has just dropped another $3.3 million in Kansas at @CaesarsSports.

A Mattress Mack bet might be the only thing that can derail Kansas right now. They have been absolutely on fire in the tournament, especially in their last couple of games. They actually trailed Miami at halftime of their Elite 8 matchup before outscoring them by 32 in the second half.

Kansas carried that over to their Final Four matchup with Villanova, quickly jump out to a 10-0 lead and never giving that lead up to the Wildcats.

If there was ever a time that the Mattress Mack curse would come to an end, it’s with his action on this very impressive Kansas team that Vegas sees as a 4 point favorite tonight