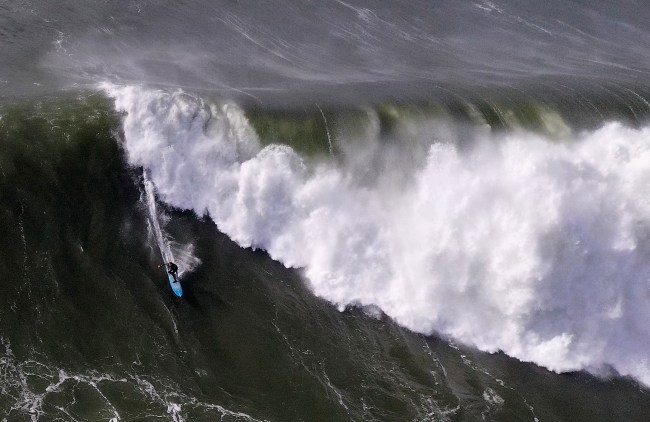 A powerful swell swept across the Pacific in recent days, first creating epic conditions at Jaws on Hawaii’s North Shore before moving to California where Mavericks in Northern California welcomed the biggest and best waves in years. The combination of massive swell and perfect wind all pushing towards Mavericks in Half Moon Bay, California brought the world’s greatest big wave surfers to Nor-Cal for some epic waves.

Mavericks has been one of the best big wave surfing spots in the world for years yet it’s often overshadowed by Jaws and Nazaré, but not this week. The entire surfing world watched in amazement as surfers like Kai Lenny bombed 3-story waves in what was described as the ‘biggest day in recent memory.’

Here’s a much better description (from SFGate) of the conditions at Mavericks than I could ever write:

“Today is probably the best and the biggest day in recent memory,” Oliver Henrikson, a resident of the Outer Sunset neighborhood in San Francisco and local surf reporter for Surfline, wrote in an email. “The waves are 25 to 30 feet (40- to 50-foot faces), but the winds are light offshore (blowing from the land to sea) making for surface conditions that have been clean and buttery smooth all day. This combination of big swell and clean conditions gives surfers the best, most inviting chance to get a wave that could be the pinnacle of their winter season, if not entire surf career.” (via SFGate)

But you came for the epic footage and that’s what you’re going to get. Here’s some drone footage and supercuts of the best rides and biggest waves from this swell at Mavericks:

Kai Lenny posted some absolutely epic pictures from Half Moon Bay to his Instagram:

Winter weather in the Northern Hemisphere creates the best surfing conditions in the Pacific. It happens every year. And it looks like these guys are in the thick of the season right now. Hopefully, there are some more epic swells on the way.