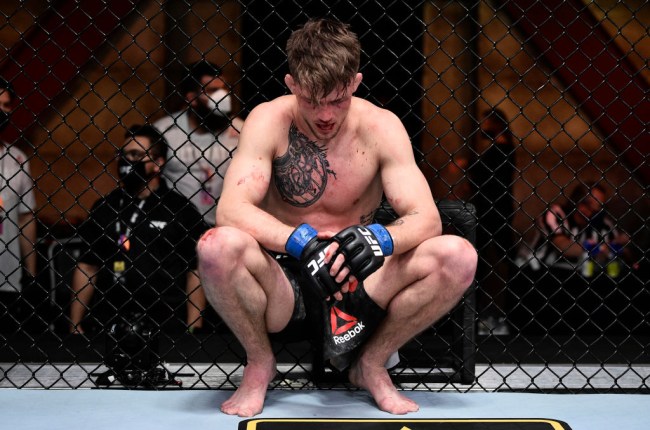 A little over a month ago, I came across a tweet that sparked a pretty lengthy internal debate in my head.

What’s the most terrifying moment in all of sports to get randomly dropped into as a normal person?

You’re 100% yourself, but thrown into that one Sports moment.

My initial thought was that nothing could be worse than taking on the responsibilities of an NHL goalie in an overtime game. However, I quickly dismissed that thought after imagining myself being dropped into the Octagon against a UFC fighter, as there is a 1000% chance that I would end up getting my face rearranged in devastating ways.

I’ve said for a while now that UFC fighters are some of the best athletes on the planet. Not only is their strength and conditioning off the charts, but the mental toughness it takes to go into a fight knowing you could have your ass kicked is insane. On top of all that, they possess extremely high skill levels in a number of martial arts, which take years of practice to learn.

This weekend at UFC Vegas 3, we saw an example of what can happen when the mental and physical pressure of being a professional fighter becomes too much to handle.

Max Rohskopf, who stepped up to fight just five days earlier after Joe Solecki withdrew from the event, lost his bout to Austin Hubbard via TKO following the second round. He had taken a hell of a beating before heading to his corner, and while he repeatedly urged his trainer Robert Drysdale to stop the fight, he had to ask for the towel to be thrown nine times before his wish was granted.

Inside the corner of Max Rohskopf before the fight is called off at #UFCVegas3 pic.twitter.com/hZrfnaMObt

Shortly after, Drysdale came under fire for pushing Rohskopf too hard but has since defended his stance in a video he released on Instagram after catching heat.

I can see both sides of the argument here (yes, believe it or not, you’re allowed to think that way). On Rohskopf’s end, the pressure he must have felt at that moment was probably immense. I can easily see why he would break mentally in that situation. Having stepped up to fight on such short notice, he probably felt unprepared and that may have been in the back of his mind before he even entered the Octagon.

On the other hand, Drysdale’s job is to push the fighter beyond what they think they’re capable of. He probably wanted to help Rohskopf get some confidence back and save him from quitting too early and regretting it later.

Either way, their interaction in the corner was very intense. As I already said, it’s hard to watch someone break down like that so here’s to hoping Rohskopf will be able to bounce back in the future.