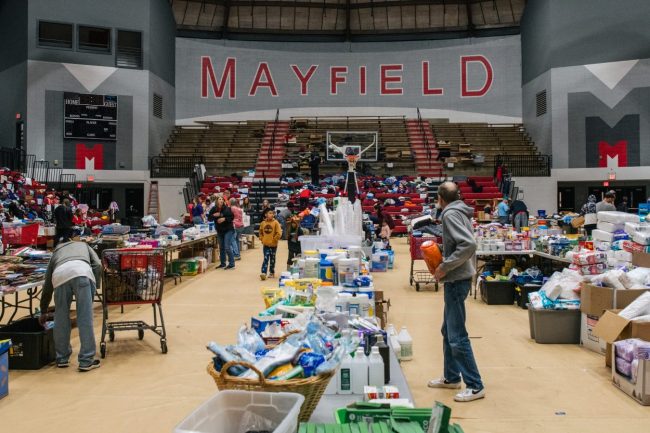 During the early hours of December 10th, at least four tornados touched down in Kentucky and left a trail of tragic destruction in its path. The largest tornado leveled much of Mayfield in Graves County, home to just over 10,000 people.

The National Weather Service declared the damage to be consistent with an EF-4 tornado, which is capable of producing winds over 200 miles per hour. Mayfield is reeling in the aftermath and its people are hurting during the holidays.

As the community works together to rebuild, many good Samaritans have rallied from across the country to help with the efforts. Among them are incredible humans like Jim Finch. He drove to Mayfield after the tornado and served food from the back of his truck.

This man drove half an hour with a grill and a truckload of food and parked right in the middle of #Mayfield, Kentucky. pic.twitter.com/xrVbrMdJ9S

Fortunately, Mayfield High School remained standing after the catastrophic event. The school’s gym is currently being used to stage and distribute donations.

Meanwhile, Mayfield has been able to continue its basketball season. It took the court against North Bullitt on Wednesday for its fourth game of the year and offered a glimmer of hope and joy.

With the clock nearly to zero, the Cardinals found themselves down by one. On the inbounds play, an open shooter, Brayden Pate, found space in the corner.

He caught the ball beyond the three-point line with one second remaining and got the ball off with 0.8 seconds left. It hung in the air for what felt like a lifetime before dropping through the rim and going in.

Nothing but net for the win!

BRAYDEN PATE AT THE BUZZER!

The Mayfield bench proceeded to explode and mobbed their teammate after the 53-51 win. After the game, head coach Payton Croft offered an amazing quote to The Mayfield Messenger’s Keith Jaco.

“I’m not going to lie, I was very emotional because of what’s gone on within our community over the last two weeks,” Croft said. “I’ve seen and heard people use the tornado as an excuse for things, but that’s not us, that’s not Mayfield basketball, and that’s not Mayfield as a community. We don’t want that excuse, it’s just adversity, and as our shirts say, “adversity creates opportunity.’”

Sports are often bigger than a game and this is one of those moments.