The Belt Being Given To The Winner Of McGregor vs. Mayweather Is Absolutely Insane 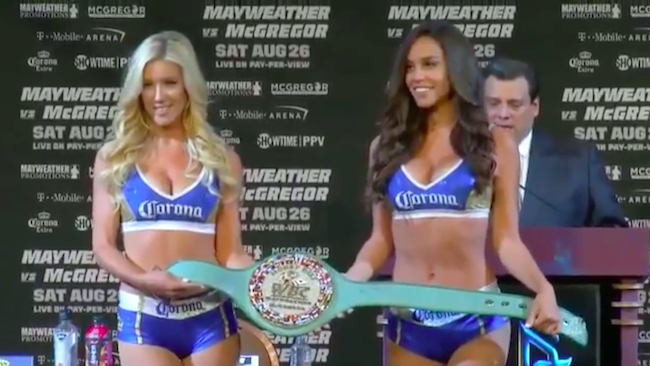 Regardless of how Saturday night’s fight turns out, both Conor McGregor and Floyd Mayweather are projected to walk away with a nice chunk of change. The Irishman will reportedly take home upwards of $80 million for stepping into the ring, while Mayweather will earn close to $250 million depending on PPV sales.

As if that wasn’t enough, the World Boxing Council just revealed a custom “Money Belt” that will be awarded to the winner of the fight, and it’s absolutely insane.

The winner of #MayweatherMcGregor will receive this belt on Saturday! pic.twitter.com/NU9bPD5oVP

According to TMZ, the belt is made of crocodile leather and contains 3,360 diamonds, 600 sapphires, and 160 emeralds in addition to around 3.3 pounds of 24k gold.

It’s not clear how much it’s worth, but considering the belt designed for Mayweather vs. Pacquiao was valued at $1 million, it’s hard to imagine this one is would go for any less.