UFC Reporter Megan Olivi Says She Was’ Genuinely Hurt’ After Stephen A. Smith Forgot To Tag Her In A Tweet 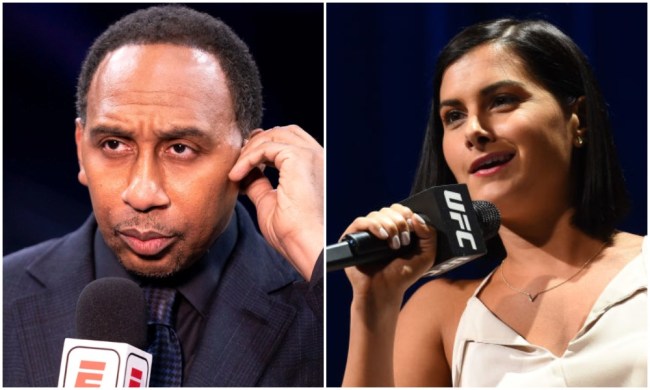 Stephen A. Smith fired off a tweet celebrating ESPN’s team that covers the UFC and forgot to tag colleague Megan Olivi in the process, and she was hurt by that.

The tweet came in late March when he decided to brag about his colleagues and publically tag each one of them. Just over an hour after Smith’s tweet went up, Olivi called him out by replying ‘you’re forgetting someone.’

Ummm hey there – you’re forgetting someone 😁

Fast-forward to UFC 261 this past weekend and Olivi was asked about the tweet during a Q&A after the fights. She explained that seeing the tweet was tough for her while pointing out the fact that he only tagged male reporters and broadcasters and explained all of the hard work she does throughout UFC broadcasts and fight weeks.

“That was actually tough for me,” Olivi said. “I don’t love social media in general, but then to play such a big role in terms of pre- and post-fight interviews, like, I’m the one on-site doing them. Then to do all the hits on the broadcast and be a part of this team and literally the only women on the pay-per-view team.

Olivi did go on to say that she didn’t think Smith excluded her in the tweet on purpose and also said “I just think it really didn’t matter to him.”

And btw……props once again to ESPN’s Until UFC team. @Jon_Anik,@dc_mma, @joerogan, @MeganOlivi, @arielhelwani, @bokamotoESPN. We simply have the best team, period. Major props to my man @danawhite for this event, too. Packed house. First sport to do it.#Thanks2AllOfYou