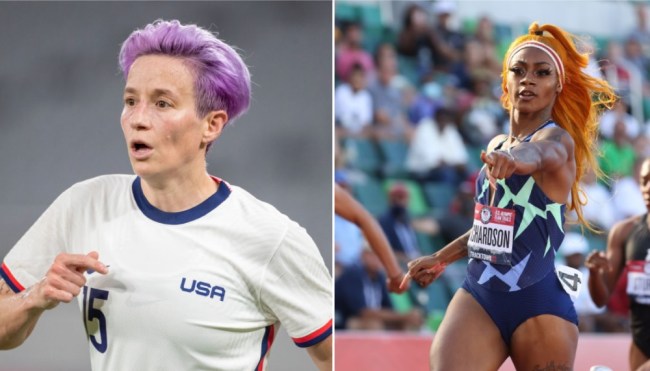 Megan Rapinoe is catching some heat from the Internet for promoting Cannabis products during the Olympics weeks after sprinter Sha’Carri Richardson was suspended over her marijuana use.

Three weeks ago, Richardson was slapped with a month-long suspension for testing positive for marijuana during the U.S. Olympic trials. According to Richarson she ingested marijuana to help cope with the death of her biological mother.

For the first time in the Olympics 125-year modern history, elite athletes are being open about their use of cannabis products to prepare them for the world’s biggest stage in sports. Leading the charge is Olympic gold medalist and U.S. Soccer Women’s National Team star Megan Rapinoe, who incorporates CBD into her training routine using products from Mendi, a company founded by her sister Rachael Rapinoe and Brett Schwager.

Mendi’s founders started the company to create a brand of hemp-derived cannabidiol (CBD) products that provide athletes with natural wellness solutions to help them recover better and perform at their best.

Despite the fact that Rapinoe is promoting hemp-derived cannabidiol (CBD) that does not contain THC people were still angry at the soccer superstar amid Richardson’s ban for smoking weed.

Disappointed in Megan @mPinoe and her comms team who, if nothing else should've caught the gross optics here, despite the differences btwn THC & CBD. Plainly, cannabis regs have been weaponized against Black people since forever & white folk have always benefitted. #Olympics2021 https://t.co/zpKbAk2bty

Girl who give a fuck. CBD and THC apart of the same cannabis plant. The point is things are only criminalized and penalized when Black people do it. White people always find a way to make things totally acceptable. Just like when weed was illegal until they found a way to profit.

A lot of people saying that it's okay because they're using CBD products, but I'm calling BS. Those products are not federally regulated and can still contain noticable amounts of THC, often more than whatever they claim, that can still make you fail a urinalysis.

they’re obviously not but CBD is a type enhancement. it improves mood and makes you unstressed which THC also does. this is technically cheating in the guidelines of the Olympics. it’s very stupid to have these rules and technicalities.

Their reasoning was that CANNABIS is performance enhancing. CBD has benefits as well, which means this was always about punishing "getting high" and nothing more.

I thought Megan Rapinoe was supposed to be an ally???? If they really about that life, they would include Sha’Carri on this or something. https://t.co/zcuyl3jJHg

anyone saying “but this is different! The other athletes only used CBD!” – this post isn’t painting that distinction and anyone sticking to it is being obtuse for fun. https://t.co/xBSnJpecFi

soo CBD is allowed cause it’s not psychoactive but the whole plant is illegal in Japan & they can still compete??? .. yeah this is bullshit.. https://t.co/VMKjNgBIXk

In case anyone is wondering why Sha'carri Richardson got kicked from team USA….it ain't cause of the weed test. Stop attacking Black women for things that white women do.

Oh and by the way weed & CBD aren't performance enhancing. They are recovery tools. https://t.co/daFUzUzNAJ