Mel Kiper Jr. Explains Why He Thinks The 40-Yard Dash Time Is Overrated 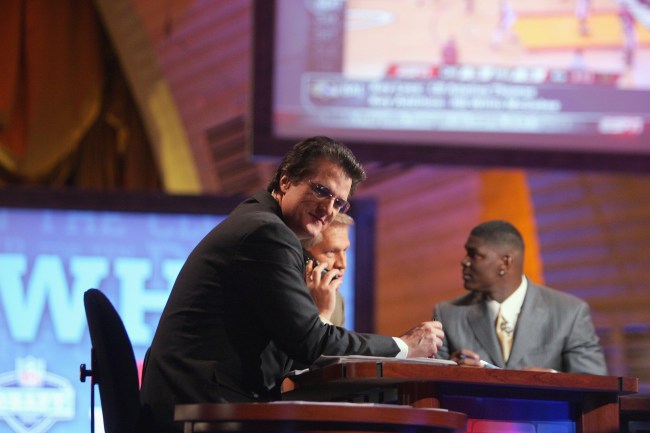 We are in the thick of Mel Kiper Jr. SZN at ESPN. The 2019 NFL Scouting Combine took place last weekend with two players from Ole Miss turning in two of the top seven, Zedrick Woods with a 4.29 fastest overall and wide receiver DK Metcalf with a blistering fast 4.33 tied for fifth best.

Everyone was freaking out over DK Metcalf’s measurables at the 2019 NFL Combine, including his alleged 1.6% body fat rate which is almost too low to be believed. Honestly, he’s shredded but I don’t see how it’s possible to have only 1.6% body fat and be alive.

As ESPN’s resident NFL Draft expert, Mel Kiper has been making the rounds nonstop lately and talking to anyone who will listen. He called into Dan Patrick’s show where the two talked about the NFL Combine measurables and Kiper discussed why he thinks the 40-yard dash is overrated while he believes in the standing vertical jump the most.

Dan Patrick: “[A former NFL scout] said the thing that he always looked for, he wanted to know how explosive you are, and he thought the vertical jump was the most important thing at the combine.”

Mel Kiper Jr.: “I agree. I think the broad jump, the vertical jump, the three cones, that quickness, agility and explosion are the most important part of it. I’ll go back to Alvin Kamara. Alvin Kamara didn’t have a great 40 time, but he had an incredible broad jump and an incredible vertical jump. So when you look at the numbers – if the numbers are bad across the board, you say ‘wow, OK, I’ve got to go back and really think about is this kid just a great college player?’ But if you get a kid that runs a less-than-stellar 40 but he has the super numbers in other explosive areas, then you’re fine.

… And 40 times, let’s face it, you can get a 40 time at a combine that’s disappointing and then they run at the pro day and it’s significantly better.” (via FTW)

It makes sense, doesn’t it? Football plays happen in an instant. You want players exploding off the line. The vertical jump is the best measure of explosiveness that the combine is working with because they arbitrarily threw together some exercises back in the day and nobody’s thought to change them over the years to fit the actual needs of NFL teams.

Who performed best in the vertical jump? Georgia’s Christian Conley was #1 with a 45-inch vertical jump followed by Virginia’s Juan Thornhill at 44.0. Notre Dame’s Miles Boykin and Missouri’s Emanuel Hall were tied for third at 43.5-inches.