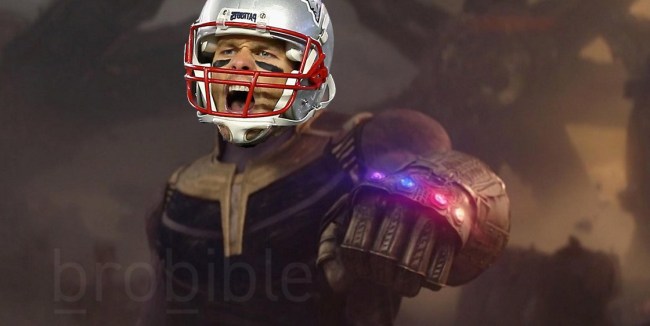 Well, that was certainly disappointing. I don’t know why, despite every bone in my body telling me not to do it, I actually held out hope that the Los Angeles Rams would actually defeat the New England Patriots in Super Bowl LIII.

I mean, I knew that Patriots were going to win as soon as they beat the Kansas City Chiefs in the AFC Championship. It was a forgone conclusion so I should have just watched the game with that knowledge and I wouldn’t have been so disgusted when it was all over.

Let’s face it. Boston wins. They just win. I can’t imagine having my teams win 10 championships in baseball and football over the past two decades. The Patriots alone have beaten me into sports submission.

Much like Thanos did when he snapped his fingers in Avengers: Infinity War, they’ve pretty much made every other team in the NFL just disappear.

Which is why the comparisons between Thanos with his Infinity Gaunlet and Tom Brady with his now six rings are so absolutely perfect today.

With his sixth Super Bowl ring, Tom Brady is about to go full Thanos and snap his fingers to make half the NFL roster disappear — further continuing his journey to become the G.O.A.T. #SuperBowl pic.twitter.com/ZQ93f1Q0aw

I ignored my destiny once, I can not do that again. @Patriots @NFL #SBLIII #SB53 pic.twitter.com/rxD9liEZNv

I can literally feel myself turning to dust and drifting off with the wind.

‘“Dread it, run from it, destiny arrives all the same.” – Thanos’ – Tom Brady pic.twitter.com/qqyLdYbiuI

Tom Brady has six Super BowI rings which means at any moment he could Thanos snap to deflate half the balls in the NFL.

Perhaps Brady will be just the secret weapon the Avengers need in Endgame? Would it surprise you at all if he was?