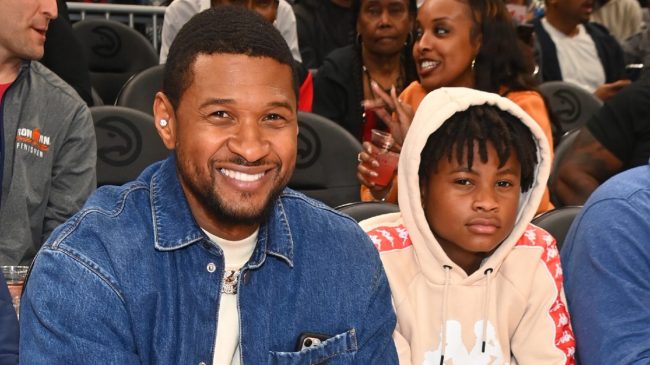 Rap star Usher was in attendance to watch the Memphis Grizzlies take on the Minnesota Timberwolves in NBA playoff action.

Little did he know he’d be sitting courtside next to his long-lost twin.

In the most hilarious of moments, the rapper donned the same exact outfit as the fan sitting beside him, from the shirt down to the Aviator-style sunglasses.

That fan, though, was no ordinary fan. It was Tee Morant, the father of Grizzlies superstar guard Ja Morant.

In what we’re assuming was pure coincidence, the two sported identical getups as they sat on to watch some entertaining basketball.

shoutout @Usher pulling up on us tonight 〽️ pic.twitter.com/miYhKDZEmt

The instance brought on a hilarious reaction from the Grizzlies’ media team.

Midway through the first half of action, Memphis opted to provide fans with some entertainment during a TV timeout. We’ve all seen this act before. The famous “Look A Like Cam,” where cameras find viewers in the stands that look like celebrities.

naturally the grizzlies had to do a look-alike cam, which ends with a fun twist pic.twitter.com/FMs6hM2ilO

And we have to say, the resemblance is uncanny.

Tee Morant and Usher… or is it Usher and Tee Morant 😂#NBAPlayoffs presented by Google Pixel on TNT pic.twitter.com/AoJrNJ71ci

The NBA world took off with the doppelganger comparison, posting some hilarious reactions on social media.

They put Tee Morant and Usher on the Look Alike Cam 😂 pic.twitter.com/nU2Q84f4Ct

Usher and Tee Morant at the Grizzlies game pic.twitter.com/sSZIZWZ9Qc

It’s not the first time this series that Tee Morant has made headlines. Last week, Morant was seen talking trash with Karl Towns, Sr. in a friendly back and forth on the sidelines during the fourth quarter of Game 1.

He seems to be enjoying himself this postseason, and he’ll be sure to make another appearance before the series is through. He’s hoping that Ja and the Grizzlies can pull out a couple more wins to advance to the second round of action.