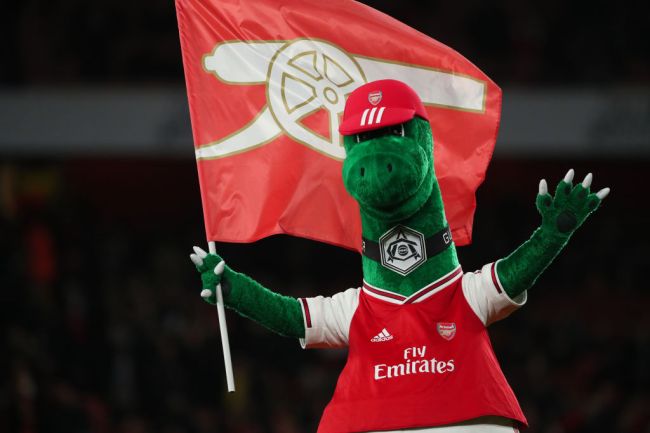 Mesut Ozil, who does still play for Arsenal despite not making an appearance for the club since March, is stepping up for the Gunners. As deadline day carried on throughout the Premier League on Monday, tough news broke out of North London as it was reported that the club was making its longtime mascot ‘Gunnersaurus’ redundant as part of cost-cutting measures.

It was a strange move seeing as how the person inside the mascot suit surely isn’t making too large of a salary, but I supposed in a global pandemic you have to cost cut where you can cost cut.

Ironically enough, the man costing Arsenal the most money on wages, Ozil, says he will pay the full salary of Jerry Quy, the man inside the suit, for as long as he’s part of the club. It was a smart move for Ozil to wait until Tuesday to offer this gesture as Arsenal were undoubtedly trying to get him off the books before the transfer window closed.

… so Jerry can continue his job that he loves so much. ❤️🙏🏼#JusticeForGunnersaurus #M1Ö #YaGunnersYa

Ozil hasn’t fit into Mikel Arteta’s plans at the Emirates since he arrived late last season. The German midfielder hasn’t even made a matchday squad in months and there seems to be no way out, at least for now, to get Ozil off the books.

Having said that, there could be a conspiracy going on here. Ozil started every game for Arteta before the pandemic shutdown and once the Premier League returned and he reportedly refused to take a pay cut, he hasn’t seen the field, or even bench, since. It’s easy to point at Ozil as the bad guy here, but maybe it’s all a pay to get the higher-ups at the club more cash in their pockets while ‘cost-cutting’ during the pandemic and Ozil is taking every bit of the heat.

The Gunners were able to sign midfielder Thomas Partey from Atletico Madrid on Monday which possibly makes things worse on the Ozil not ever seeing the field front.