Mets’ Luis Guillorme Earned A 22-Pitch Walk, Securing His Throne As The Most Exciting Spring Training Player Ever 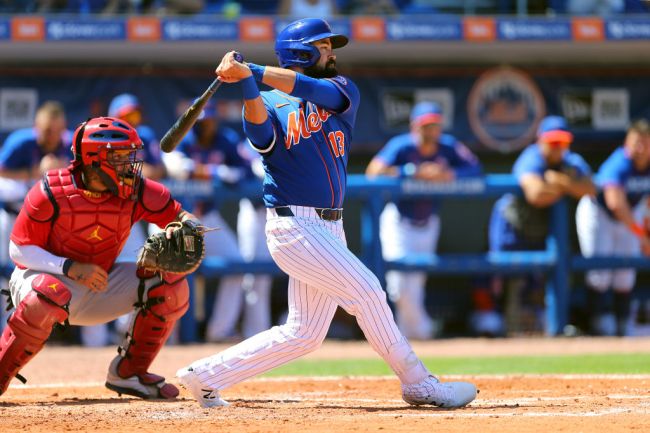 Luis Guillorme is the most exciting spring training player of all-time. The Mets’ super-utility infielder hit leadoff in the fifth inning against Cardinals pitcher Jordan Hicks and the two went at it for 12 minutes. Eventually, the epic 22-pitch battle resulted in a walk. It was the longest plate appearance on record since 1988 and the New York dugout went wild.

Luis Guillorme drew a 22-pitch walk and the dugout was losing their minds 🤣 pic.twitter.com/syO6vrfYtT

It’s not like Hicks, who was making his first appearance on the mound since Tommy John surgery ended his 2020 season early, was throwing lobs either. Saint Louis’ promising closer threw six pitches at or above 100 miles per hour— five of which Guillorme fouled off. And of the 22 pitches, only nine were outside the strikezone.

Jordan Hicks' first time on a mound for game action since TJ surgery, and Luis Guillorme made him throw TWENTY-TWO pitches before EARNING a walk.

And that was the only batter Hicks faced. pic.twitter.com/w3n9rxTLgI

To make the feat even crazier, Guillorme fell behind 0-2, before battling back to a 3-2 count. He fouled off 16 pitches in the process and earned a walk on the 22nd. Hicks was removed from the game after the at-bat, presumably because the Cardinals’ staff expected him to throw about that many pitches in the entire half inning.

This is not the first time that Guillorme did something electrifying in spring training. He was hanging out in the dugout back in 2017 when an arrant bat came flying his way. Instead of diving out of the way or even flinching at all, he stuck his hand up and causally snagged the flying wood out of thin air.

This now may be the second greatest thing Luis Guillorme has done. pic.twitter.com/HKxqogJTFq

He spoke about the walk after the game.

"I'm just happy I ended up with the walk because if I would've gotten out that would've been not fun for me, all that work for nothing"

When asked how the incredible 22-pitch plate appearance compared to his one-handed bat snag, Guillorme gave the nod to his catch.

Which moment did Luis Guillorme think was better: the 22-pitch walk or the bat catch from a few years ago?

"I think the bat catch is always gonna top everything honestly at this point" pic.twitter.com/r73KWNBoB3

He also has a great beard.