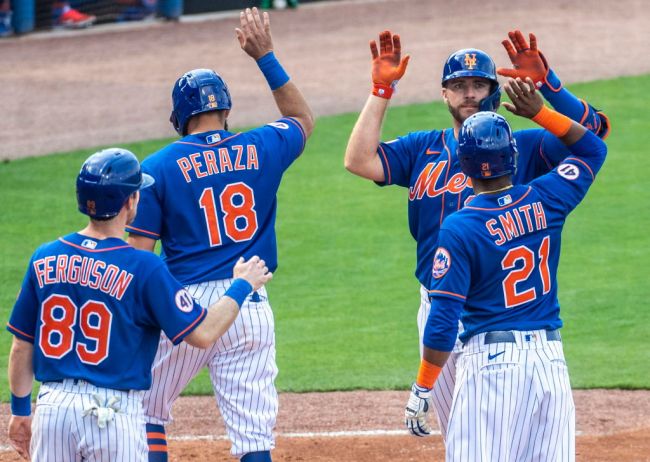 Spring Training is well underway and MLB clubs are preparing accordingly as Opening Day is scheduled for April 1. For the Mets, this means having a little bit of fun.

The best part of the video is someone yelling ‘don’t be nervous’ before the out and celebration ensued.

The Mets are practicing the final out of the World Series in spring training 😂pic.twitter.com/T8pNTusQZw

I think you can watch this video and react in two different ways. On the one hand, it’s a little pathetic, but on the other, it’s actually kind of awesome to see.

As you’d predict, plenty of people on social media are making fun of the Mets for doing this. After all, this is the Mets we’re talking about here, one of the great laughing stocks in professional sports of my 28 years of living. This is a franchise that hasn’t won a World Series since 1986 and they’re out there being told to celebrate as they’ve just won something meaningful at practice. The jokes literally write themselves.

On the flip side, it’s kind of cool to see professional athletes do this sort of thing. The MLB season is an absolute grind and these guys having a bit of fun at practice isn’t hurting anything. Being positive and joking around a bit, especially how things are going around the world these days, is better than moping around and going through the motions.

Just think if the Mets do win the World Series this year. It’s highly unlikely, but looking back at this video would be incredible if they were to pull it off.