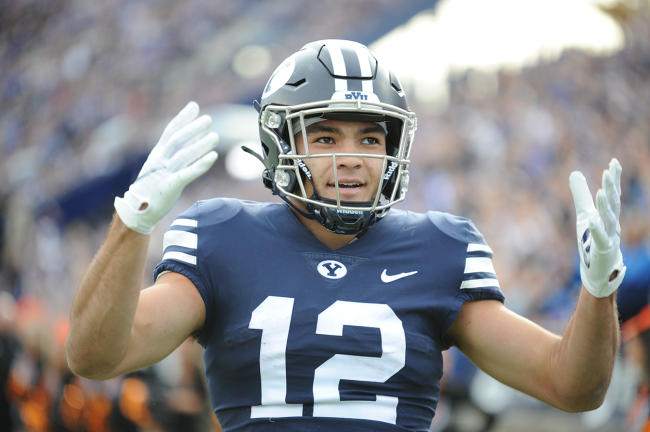 The NCAA granted student-athletes (an antiquated term) the ability to profit off of their Names, Images and Likenesses on July 1, 2021. And now, exactly 162 days later, the NCAA is already muddying its own waters by probing two major FBS football programs for potential violations.

According to Sportico, the NCAA is actively looking into a pair of high-profile NIL deals within the BYU and Miami football programs. Potential violations stem from a pay-for-play model, which is prohibited under the NCAA’s temporary NIL guidelines.

The BYU deal in question is a partnership with the protein bar company ‘Built,’ which provided compensation for every walk-on member of the football team. The Miami deal in question is an offer that was made by one of the top training academies for MMA fighters, American Top Team.

“We have communicated with the NCAA concerning the Built Bar NIL arrangement,” Jon McBride, BYU’s associate athletic director for communications, said to Sportico. “They have informed us they do not have any additional questions at this time. We will continue to monitor and abide by the NCAA interim NIL policy.”

A spokesperson for Miami said that the school has not been contacted by the NCAA.

Regardless of what ends up happening with the probe, this is a huge deal.

There has been a lot of confusion surrounding the rules of NIL and their enforcement and the reason for that confusion is because the NCAA has refused to provide clear, comprehensive guidelines. College athletics’ governing body failed to create its own policies on NIL in 2020.

Thus, when 13 state laws allowing college athletes to earn money from their right of publicity were set to take effect on July 1, they panicked. In turn, the NCAA issued a bare-bones interim policy that legalized NIL.

It is extremely confusing. The rules are jumbled and vague.

As a result, the deals at Miami and BYU are now in question. Not necessarily by fault of the universities, but because of the NCAA’s incompetence.

Did BYU or Miami violate the rules? That is unclear.

If they did, was it intentional? Probably not.

If they did, was it because they did not know what is and isn’t against the rules? Likely.

Had the NCAA put together a plan that was definitive, this might not be an issue. But, based on history, this should come as no surprise.

Well, if the NCAA determines that BYU and Miami athletes are in violation of its policies, the next step would be a formal investigation. There is no timetable as to when that might happen.

As of right now, neither program is in trouble. A probe is exactly that.

However, if this is to go any further, it could change everything about the way that college football. Schools are only just now figuring out how this whole NIL thing works and this is a huge red flag.