All 90 Scholarship Football Players At Miami To Be Offered Huge Contracts For Name, Image, Likeness 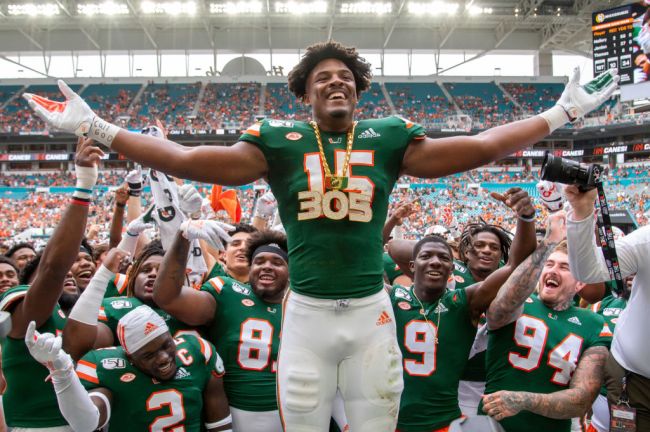 It has been five days since the NCAA allowed all athletes to profit from their Names, Images and Likenesses and the University of Miami is cashing in. Should they so choose, all 90 scholarship football players are set to be paid at least $6,000 per year.

Quarterback D’Eriq King is among the most profitable athletes to date, multiple athletes have signed endorsement deals with South Beach establishments, and now the local gym circuit is getting in on the action.

Gary Ferman of CaneSport reported on Monday that one of the nation’s top training academies for MMA fighters is finalizing plans to offer NIL contracts to every single player on scholarship for the Hurricanes.

American Top Team’s main camp is based out of Coconut Creek, Fla., about an hour north of Miami. It also has 44 licensed gyms across South Florida and around the world.

Dan Lambert founded American Top Team in 2001. He created a new marketing company “Bring Back The U” and is administering a deal with all 90 scholarship players on the football team.

If all 90 players choose to accept, the one-year payout from American Top Team will total $540,000. Lambert joined Ferman to discuss the NIL deal:

Lambert’s deal is unprecedented thus far. He is the first person/company/brand (that we know of) to offer a NIL endorsement contract to an entire team.

In doing so, Lambert is positioning himself and American Top Team as the officially unofficial gym of University of Miami football. It’s a really interesting angle that will undoubtedly be replicated around the country.

In addition to the gym that he founded two decades ago, Lambert’s “Bring Back The U” also hopes to recruit other businesses to offer similar NIL deals. He already has MMA fighter Jorge Masvidal in his camp as an ambassador.

Name, Image and Likeness is going to be the Wild, Wild West until teams, players and companies alike get a grasp on the market. Whole-team deals like this and companies like “Bring Back The U” are changing the landscape as we know it.