The Miami Dolphins Suck At Winning Games, But They’re Best In The NFL At Testing Positive For COVID-19 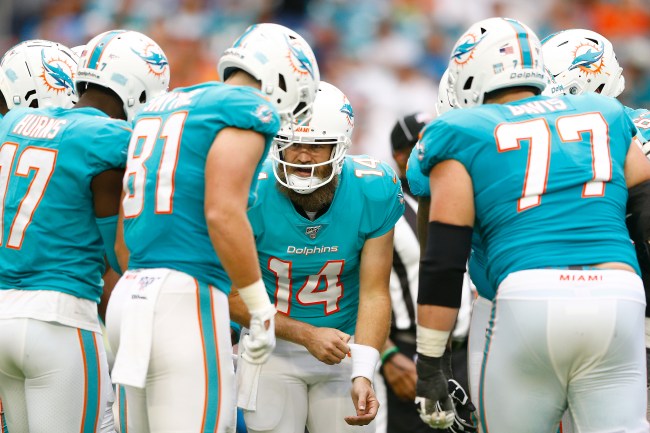 The Miami Dolphins haven’t had a whole lot of luck on the football field over the past few seasons, with the team racking up a pathetic 18-30 overall record since the 2017 NFL season. But, while the Fins can’t seem to win on the gridiron, according to a new heat map revealing which NFL teams have shown the most positive cases of COVID-19, Miami tops the list with in eye-popping fashion, proving they’re at least good at something — it’s just not something good.

Thanks to the smart people at Johns Hopkins (which gathered data of the coronavirus hot spots around the U.S.), we now have an idea of which teams should be the most concerned with the fight against the pandemic. With a reported 72 players testing positive for COVID-19 overall, according to an NFLPA memo sent on Thursday, the Miami Dolphins appear to top that list. Take a look at the info below for more details, and to see how your favorite NFL team fares.

How is your NFL city doing with the pandemic? Data via Johns Hopkins, graphs via NFLPA pic.twitter.com/ZTI71QBp35

Now, given the fact that both Florida and Arizona are two states where COVID-19 cases are spiking like crazy, the info from the NFLPA shouldn’t be too surprising. I mean, when it’s being reported that 15,000+ people are testing positive each day in Florida, the situation is bound to impact NFL players. It’s why, per the Johns Hopkins data, the top-4 teams on the list all reside in the Sunshine State and Arizona.

I don’t want to make light of the situation — because this pandemic is serious and we all need to do our part in trying to eliminate the spread of it — but considering the Miami Dolphins have an owner talking about playing games with fans in the stadium, as well as putting forth a full-fledged plan about how they want to execute such a strategy, it’s pretty ironic that data shows they lead the league with the most cases.

Take a look at our initiatives to create a socially distant and safe training camp and stadium environment for fans this season > https://t.co/Ri6vKkyQPz

Here’s to hoping nothing serious happens to any of the NFL players, their friends or families, because this whole COVID stuff has proven to be no joke.