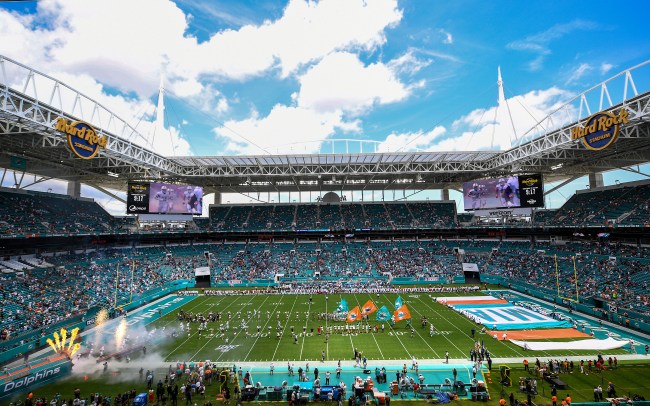 The NFL will release their 17-week schedule next week and are confident there will be a 2020 season with fans attending games at stadiums.

NFL schedule drop to include full 17-week slate, with visions of fans in the stands.

League is not considering centralized location for games.
https://t.co/BdpfhYFzRU

On Monday, The Miami Dolphins released a plan to implement social distancing guidelines at their entrances and exits at Hard Rock Stadium to lessen the number of people coming in and out at the same time.

During an appearance on ABC’s Good Morning America Dolphins Vice Chairman/President/CEO Tom Garfinkel revealed several new mock-ups that would adhere to the social-distancing guidelines implemented to slow the spread of the coronavirus.

“We would have times to come in for security at different gates so people would be separated out in terms of when they enter the stadium,” Garfinkel said. “We would exit the stadium much like a church environment where each row exits so people aren’t filing out all at the same time in a herd.”

Garfinkel went on to say that Hard Rock Stadium’s social distancing plans would include all fans wearing masks and ordering food from their seat then go pick them up when ready to eliminate lines at concessions.

“When our fans, players and staff are able to return to Hard Rock Stadium, we want them to have peace of mind that we’re doing everything we can to create the safest and healthiest environment possible,”. “We didn’t want to create our own standard, we wanted to be accountable to the most credible third-party standard that exists. Working with the GBAC ensures compliances with critical guidelines for the highest standard of cleanliness and it is our hope that other venues will follow suit as we navigate through these unprecedented times.”