The Miami Dolphins Passed On Picking Up Drew Brees, Twice, But They Did Get Oklahoma’s Josh Heupel! 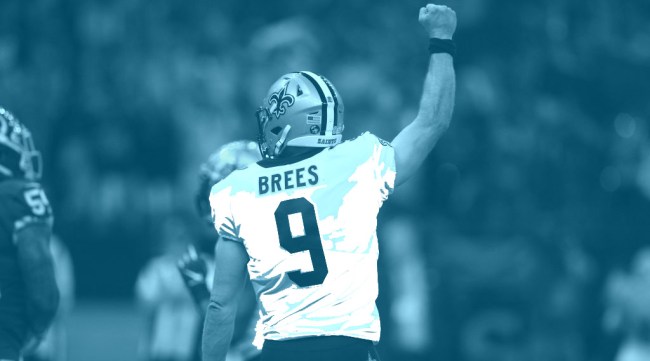 Back before the 2001 NFL Draft, the Miami Dolphins, coming off an 11-5 season under head coach Dave Wannstedt, were looking to take a quarterback because Damon Huard had left to sign with another team and Jay Fiedler, was, well, Jay Fiedler.

Available in the NFL Draft that year was an undersized, 6-foot tall quarterback out of Purdue named Drew Brees.

Brees had thrown for 11,792 yards and 90 touchdowns in four seasons with the Boilermakers and VP of Player Personnel Rick Spielman was interested, reports the Miami Herald.

“At least three people on our staff have seen every snap in his career,” Spielman told Sports Illustrated. “We will have a substantial field on Brees before we interview him at the combine in Indianapolis.”

But something happened between the time Spielman was studying Brees and the April draft rolled around because with Brees on the board, the Dolphins used their 26th overall selection on cornerback Jamar Fletcher from Wisconsin.

Brees went to the Chargers with the 32nd overall selection — the first selection of the second round that year. And it did not go unnoticed that the Dolphins passed on Brees. Spielman was asked that day why pass on an accomplished QB at that point?

“It really wasn’t a consideration,” he replied.

When asked about Brees after the draft, Spielman said, “We thought Drew would be an upgrade over Jay. But we don’t think he is that much better. We feel good about Jay. Plus we think we really upgraded our secondary with Jamar. He can play press. He can help on special teams. He’s going to play sooner. He’s going to help us more.”

Fletcher ended up starting a total of six games in three seasons for the Dolphins before being shipped off to San Diego.

The Dolphins did actually take a quarterback in the 2001 Draft, selecting Heisman Trophy runner-up Josh Heupel from Oklahoma in the sixth round.

For months, the Miami Dolphins scouting department was suggesting the team select Drew Brees in the 2001 Draft. Then Dave Wannstedt was OK with passing on Brees seven picks before he was selected, because Josh Heupel was there later. Heupel’s career NFL passing yards? 0. pic.twitter.com/xlS0XN77a1

But that’s only half of the story.

In 2005, with Nick Saban as the Dolphins coach, and coming off a 9-7 season, the team was looking for an upgrade from their starting QB Gus Frerotte.

Brees, who had suffered both a torn labrum and a partially torn rotator cuff in his throwing shoulder in the last game of the 2005 season, was available.

After receiving a massive offer from the Saints, sources reported that he still would have preferred to play for the Dolphins.

So he left New Orleans without signing a contract and flew to South Florida. He had dinner with Saban at a place called Grille 66 in Fort Lauderdale which to this day remains where the Dolphins take their free agents and coach candidates and alike.

Everything seemed cool but the next day weirded Brees out. He was reportedly subjected to a six-hour physical that centered, of course, around his surgically repaired shoulder. To this day, I am not certain whether or not the Dolphins made Brees an offer. A good source close to Brees insisted Miami did, although it was a lowball offer.

Instead, the Dolphins ended up trading a second-round pick to the Vikings for Daunte Culpepper, a QB who tore the ACL, MCL and PCL in his right knee the previous season.

Culpepper ended up playing in a grand total of four games for the Dolphins. Drew Brees has missed two games in 12-plus years for the Saints. And the Dolphins have used 11 different starting QBs since Culpepper was signed including Joey Harrington, Cleo Lemon, Trent Green, John Beck, Chad Pennington, Chad Henne, Tyler Thigpen, Matt Moore, Ryan Tannehill, and Jay Cutler.

[Herald, For The Win]