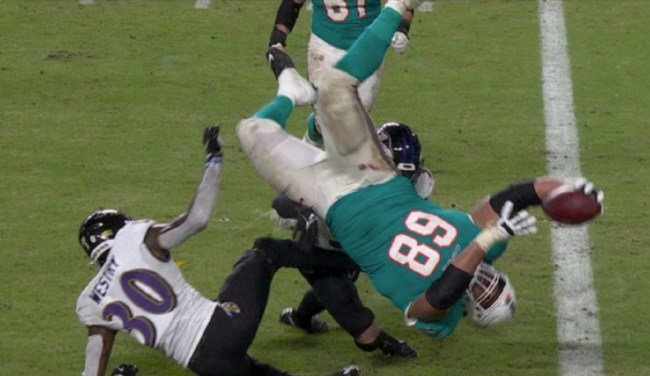 Miami Dolphins offensive lineman Robert Hunt may have made the best “big man” play of the season on a touchdown that unfortunately didn’t count.

In the fourth quarter of the Dolphins-Ravens game, QB Tua Tagovailoa passed the ball to the 327 pound Hunt, who ran towards the end zone and found himself getting flipped on his head as he got the ball to cross the pylon.

A+ for effort, big man pic.twitter.com/Y85KHJBUKu

Unfortunately, Hunt was deemed an illegible receiver, and the play was called back, but fans were still in awe of Hunt’s athletic play.

THE MONA LISA HAS NOTHING. NOTHING. ON THIS. pic.twitter.com/ZhYlMBxmvg

Robert Hunt knew he wasn’t eligible and still caught that pass and ran forward for his touchdown, I respect that he wanted his moment

I DEMAND we let this stand. RULES BE DAMNED