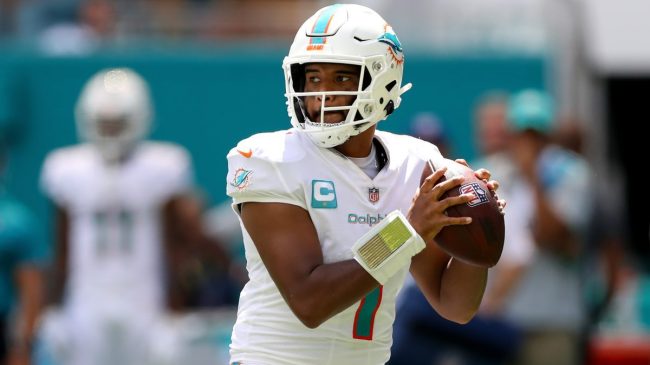 Tua Tagovailoa has been at the center of the NFL universe over the last week. The third-year Miami Dolphins quarterback led his team to an impressive 21-19 win over the Buffalo Bills on Sunday. But not before suffering an injury that saw him stagger off the field just prior to halftime.

Tagovailoa controversially returned to the game in the second half, which led to an investigation by the NFLPA into the team’s handling of the league’s concussion protocols.

Dolphins coach Mike McDaniel later claimed that Tagovailoa suffered a back injury, not a head injury. Though the rookie head coach did not give any update about his signal caller’s status for Thursday night’s showdown with reigning AFC champ Cincinnati.

Now it appears we have an answer to those questions. And it’s good news for both the Dolphins and Tagovailoa.

ESPN’s Marcel Louis-Jacques reports that Tagovailoa “made positive strides” throughout the week and is expected to play against the Cincinnati Bengals are Thursday night.

The decision was made Thursday morning that Tagovailoa is good to go barring any setbacks, the source said.

The Alabama product has been a revelation for the Dolphins this year. Tagovailoa has shined in his first year under McDaniel after struggling in two seasons prior. He ranks second in the league in both passing yards (925) and touchdowns (8). He’s also cut down on turnovers, having thrown just two interceptions through three games. Only Lamar Jackson boasts a better passer rating (119.0) than Tagovailoa’s 117.8

Tagovailoa squares off with fellow young QB star Joe Burrow on Thursday night. Burrow has struggled mightily to start the 2022 season. The third-year QB out of LSU threw for just 812 yards, six touchdowns and four interceptions in the first three games,