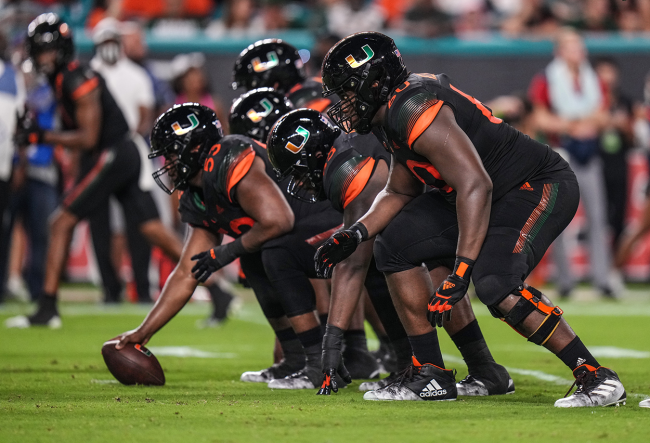 There are high expectations for a quick turnaround in Coral Gables this fall. Miami football has a new head coach, is coming off of a 7-5 season, and is hopeful that this is the year that the Hurricanes can return to significant national relevance.

As Mario Cristobal begins his first year at the helm of his alma mater, he is inheriting a quarterback that many consider to be one of the best in the country. As a redshirt freshman in 2021, Tyler Van Dyke completed 62.3% of his passes for 2,931 yards and 25 touchdowns with only six interceptions.

He showed flashes of being elite and has a lot of college and NFL football analysts intrigued by whether he can continue his strong performances and even improve this fall. Van Dyke has the potential and if he can put it all together, he could have Miami in the conversation for a College Football Playoff.

However, for Van Dyke — or any quarterback — to succeed, he must have enough time to throw the ball. And that comes down to the offensive line.

Based on the strength of the Hurricanes’ Big Uglies, Van Dyke should be in good hands. As Miami continues summer workouts prior to fall camp, the offensive line hit the weight room on Friday.

Not one, but two different Miami Hurricane linemen put up 700 pounds on the squat rack. The environment was raucous.

Sixth-year senior Justice Oluwaseun, who stands 6-foot-3, 325 pounds, got the party started. He was mobbed when his bar went back on the rack and rightfully so.

The same went for what appears to be fifth-year junior Jared Griffith, who is 6-foot-3, 318 pounds. He was properly mobbed as well.

Both Griffith and Oluwaseun lifted double their weight. It was absolutely bananas.

Van Dyke must have loved seeing Miami’s offensive line coach post those two videos. Big Uglies lead the way and the ones in Coral Gables are STRONG!